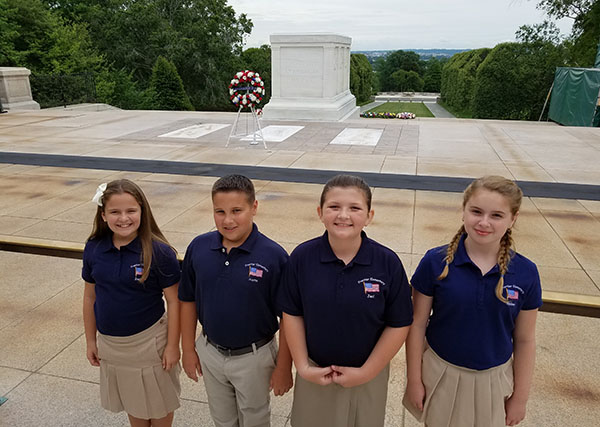 Four safety patrol students from Frontier Elementary School — Jaci Dulany, Isabella Fontecchio, Austin Hall and Sydney Rogers — helped to lay a wreath at the Tomb of the Unknown Soldier at Arlington National Cemetery on Monday, May 22.

Students who wanted to be considered for this honor were required to write essays stating why they should be selected and if they had any family members buried at Arlington National Cemetery. Those students were then entered into a lottery, since only four could participate.

“I felt honored and privileged,” Hall said about his participation in the ceremony.

“It was amazing and a once-in-a-lifetime experience,” Rogers added.

“This is something I will remember for the rest of my life, and I am thankful to all who have served,” Jaci Dulany said.

After laying the wreath, Dulany made a stop at her great uncle’s grave with her mother, a safety patrol co-sponsor, to pay their respects for his service. “I am very proud of all of my students who participated in the wreath-laying ceremony,” Sherrie Dulany said. “It is a huge honor to be able to pay their respects to those that gave all. We should teach our children that freedom is not free. Those who fight to protect us are the ones who pay for those freedoms, some with the ultimate sacrifice.”

ABOVE: The four Frontier students at Arlington National Cemetery.