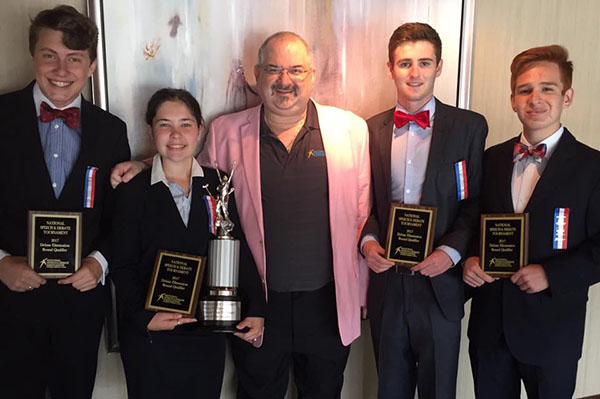 In addition, McDaniel was officially recognized as the fifth-best speaker out of more than 900 competitors in World Schools Debate. This makes her the highest-finishing Wellington debate student in NSDA history.

Wellington debate coach Paul Gaba said the team’s success was based on a strong work ethic and the ability for his students to focus on the task at hand.

“World Schools Debate is a relatively new event in the United States, and this was the first time any of these students competed on the national scale in this event,” Gaba said. “We essentially had only two weeks to prepare for the national championship, because of semester exams and post-graduation schedule conflicts for the seniors on the team.”

Even with limited time to prepare, the students were true professionals.

“But we worked hard those two weeks, and I think the results prove that,” Gaba said.

McDaniel and Yeackley recently graduated from WHS, while Schloss and Slaughter are entering their senior year.

The preparation included daily three-hour-long workshops where the team met to research, organize, write and re-write eight prepared speeches, as well as travel to Coral Springs, Orlando and Tampa to scrimmage against other World Schools Debate teams from neighboring Florida NSDA districts.

The Florida Oceanfront team lost in double-octafinals on a 2-1 decision to the top-seeded (and eventual national runner-up) team from East Texas. But, Gaba noted, it was the most successful district performance in the event.

“My goal was for them to be competitive, because there are so many factors that come into play in debate rounds,” Gaba said. “These factors can include judge bias on a topic, fatigue or how effective the arguments are made or responded to by students.”

World Schools Debate is a three-on-three format. While a given team may consist of five members, only three students from a team participate in a given debate. Teams are assigned one of two sides in each round — either the “government team” proposing the motion, or the opposition team advocating the rejection of the motion.

Resolutions come in two types: prepared motions and impromptu motions. Prepared debate motions included whether the rise of alternative media is a good thing, whether compulsive climate science education should be taught in secondary schools, whether sanctions on Russia should be increased and whether the commercialization of feminism has been detrimental to the movement.

Impromptu motions included whether police officers implicated in the deaths of unarmed civilians should be automatically indicted, whether governments should support paid parental leave and whether medically non-essential cosmetic plastic surgery should be banned.

All topics needed to be debated from a global perspective, meaning teams needed to stay away from United States-specific argumentation. And, while teams had advance time to research and put together arguments on prepared motions, they only had one hour in which to structure impromptu arguments, and had to do so without internet access; their only resources were a dictionary and an almanac.

In addition to success in World Schools Debate, McDaniel also went 7-2 in Extemporaneous Debate, finishing tied for 19th overall out of 915 competitors.