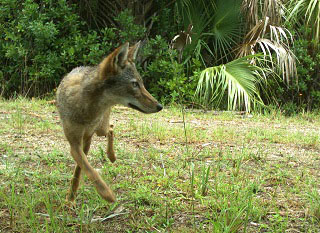 The presence of coyotes in the western communities is once again becoming a concern as rural areas become more populated.

Social media pages, such as Loxahatchee Groves Lost and Found Pets on Facebook, have had discussions on coyote sightings. Several members reported seeing them in Loxahatchee Groves, The Acreage and Jupiter Farms.

“It’s one of those things that people have to deal with,” Browning said. “It’s mostly about protecting the goats and things like that. There are people who put donkeys out with them, or a llama, and those will control the coyotes. There are also trappers who will come in. We have not done anything as a town. We had some discussion at one time, but it really didn’t go any further than that.”

Browning said that it is not unusual for coyotes to make homes under the porches of houses, in sheds, or to expand the burrows of gopher tortoises and other animals.

“They can live very close to humans,” he said. “There’s plenty of places for them to live out there.”

Even so, coyotes are quite shy and avoid direct contact with humans, but can be a menace to small domestic animals.

“They’re survivors,” Browning said. “Normally they will go after house cats, small dogs, and other pets and farm animals.”

He does not recall coyotes ever being a threat to humans.

“I’ve only seen them two or three times in Loxahatchee Groves,” Browning said. “I know that they’re here. I’ve seen their tracks.”

Parrish, who lives locally, said she knows they are out there.

The average coyote weight is about 28 pounds, but they can run up to about 45 pounds, Parrish said. “They’re common,” she added. “They’re in residential areas.”

They rarely pose a threat to people, especially adults. They can be curious, but are also timid and generally run away if challenged. If a coyote approaches too closely, they can be frightened away if you make loud noises and act aggressively, although those tactics’ effectiveness can wane over time.

“Making loud noises, yelling at the coyote, making sure that they know you are there and present [can] deter them from coming into that area, but it really is about managing that environment,” Parrish said.

Coyotes can be removed from a resident’s own property by legal and humane methods, and this is allowed by state law, she said.

The FWC does not trap coyotes, but there are professional trappers for hire who can capture and relocate them.

“Many [trappers] throughout the state provide live trapping services for a variety of different animals, coyotes being one of them, but not every trapper will take a coyote,” Parrish said. “Coyotes are a little bit more difficult to trap because they’re not like a raccoon that will enter into a cage. A coyote is not as easy to trap. They’re pretty smart and pretty elusive.”

Coyotes are primarily nocturnal, although it is not uncommon to see them in daylight hours, especially in residential areas.