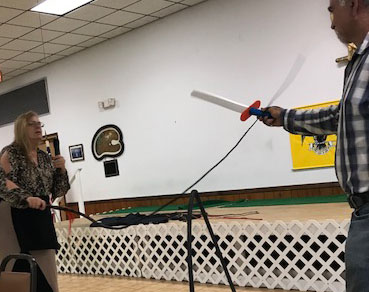 On June 13, the Civil War Round Table of Palm Beach received a lesson on how to fight with a whip. The guest speaker was Cindy Morrison, a whip artist and martial arts weapons champion. Whips were a common tool and sometimes a weapon during the American Civil War era. Her presentation also included information on the supply wagons that provided the Union and Confederate armies. The Civil War Round Table meets once a month at the Scottish Rite Masonic Center in Lake Worth. Learn more at www.civilwarroundtablepalmbeach.org. Shown above, Morrison demonstrates how to take a weapon away from an opponent, Mark Sharone. Photo by Linda Sharone