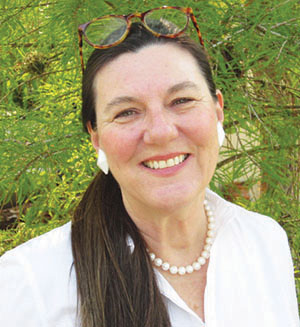 Three years ago, someone carelessly placed a neatly-stacked pile of weathered fence sections curbside for the trash men to pick up. The guys never even saw them.

What a gold mine!

It took me a few hours, but I dragged each one half a block to our house, then brought Mark outside to tell him I had found the paneling I wanted put up on the porch. He sighed.

Over the summer, I dislodged each board from its moorings, pulled every nail and stacked the boards in three piles according to quality.

But none of that is the point of my story. The point is that this porch project left him unavailable to string the lights on our Christmas tree, traditionally his job. No problem; I would do it! I decided to surprise him, getting up early to do it while he slept.

Before I began, I tested all the lights. If there’s one thing you learn from cursing men, it’s to test the lights before they’re on the tree. They lit up nicely and — also important — each string matched the other strings. You don’t want half your tree blinking orange and the rest, orange-less and not blinking.

So, I unplugged everything and began stringing. I started at the top and worked my way down, keeping in mind that I would be the one unstringing everything. I tried not to tangle anything or inadvertently tie knots.

Voilà! Four strings of lights up and ready to go. I plugged the extension cord into the outlet and stepped on that little red button, one of the best inventions ever for people like me who are too lazy to bend down and plug in the tree night after night.

Grrr! I had tested these %@#… well, no point in cursing. I’d just pull them off and stretch the other ones up to cover the dark space. I pulled them off and decided to test them once more before throwing them away.

Voilà! They were fine, twinkling their little hearts out. I took a deep breath and climbed to the top of the tree again, tucking them in among the branches as I went and reconnecting them to their brothers and sisters. I stepped on the red button and — voilà! — now the middle section of the tree was dark. Frustrated, I gave the tree a shake. Voilà! Everything was on.

Hmph. That was odd.

Yet, on is on. The tree looked great. I tiptoed gently backward and quickly turned away. Surely, if I didn’t look at the lights, they’d be fine. In fact, you know what? I’m too busy right now to look at the tree anyway. That’s right. I have a column due in less than a week. I’d better write it now, while I’m thinking about it. And I need to go into the other room to do that. I’m not looking back… not looking back… well, maybe just one peek around the corner…