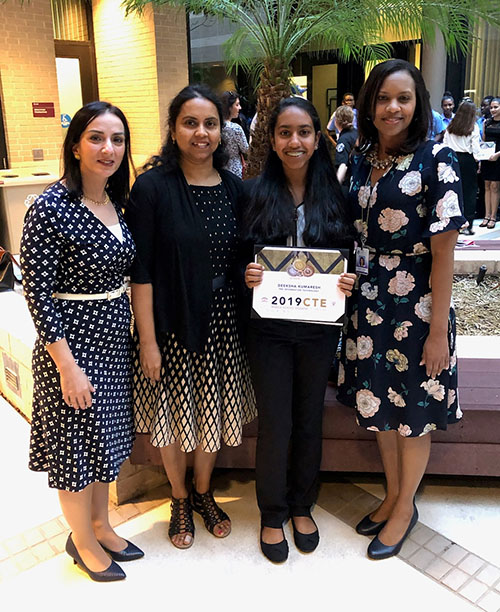 Eighth grader Deeksha Kumaresh was recently selected as this year’s outstanding career and technical student at Emerald Cove Middle School. She was recognized at the February meeting of the Palm Beach County School Board, along with the other outstanding students in the county. Kumaresh is a part of the Pre-IT Academy and is currently enrolled in a rigorous schedule with a 4.0 GPA. She has completed more than 100 hours of community service combined at the Quantum House, Shirdi Sai Temple and Feeding South Florida. At Emerald Cove, Kumaresh holds the position of FBLA vice president, is the vice president of National Junior Honor Society, and an active member of Battle of the Books, Math Academics, the SECME Debate Team and the Art Club. Shown above at the school board meeting are ECMS Pre-IT Academy Coordinator Salam Shuhaiber, Deeksha Kumaresh with her mother and Principal Dr. Eugina Smith Feaman.