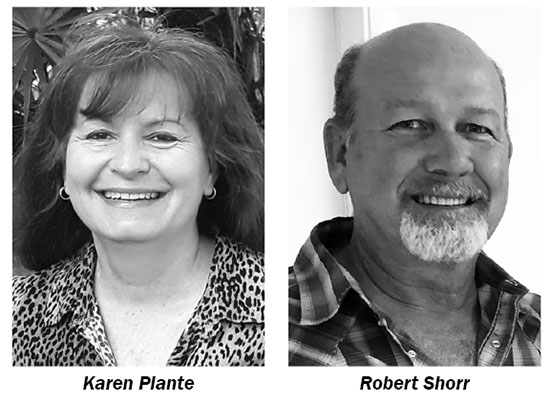 Karen Plante and Robert Shorr are running for Seat 4 on the Loxahatchee Groves Town Council in the election on Tuesday, March 12. The seat has been held by Mayor Dave Browning since the town’s incorporation, but Browning has decided to step down after four terms.

Karen Plante — Plante moved to Loxahatchee Groves about 16 years ago from Broward County with her husband, Dan, and her son. She worked as a veterinary technician for 17 years before getting her teaching degree from Florida Atlantic University. After teaching for a while, she left to have her son, who is home schooled and is now dual-enrolled in high school and college at age 16.

“I went to FAU as an older student,” Plante said. “I put myself through college. I bought my own house when I was about 22 years old, and after a few years, I decided that I like animals a lot. I do a lot of things with animal and wildlife care places. I’ve donated time doing things with animals, working in a pet clinic, but I also love kids, so I put myself back into college and became a teacher.”

Plante said she considers home schooling her son as a full-time job. She volunteers at the South Florida Fair and in the guardian ad litem program to help children who are in the court system.

Plante said she is running because she loves Loxahatchee Groves and wants to preserve it.

“I would love to protect its unique nature, its rural lifestyle,” Plante said. “I would love it to be the same for future generations. I would love for my son to stay here and enjoy the trees, the wooded areas, the parks, the ability to feel separate but be near a city. At night, it’s very dark. You can see the stars. I think our town is a really great town to live in and raise a family in. You can have animals. The farms are great, and the neighbors are great.”

Plante noted that residents seem deeply divided on some issues, but not that.

“They want this town to stay rural,” Plante said. “They want to be able to enjoy it and come home to a peaceful area.”

Plante hopes the transition to the town’s new manager, Jamie Titcomb, will improve relations with some residents who had issues with the old manager.

“Unfortunately, the morale has kind of gone down in respect to him, and I think that some of it is based on the roads,” Plante said. “Everybody blames everybody else for the roads. I’m hoping that everyone who gets on the council can work well with the new manager, and he can bring morale up and have an open dialogue with everybody.”

Plante believes that she is good at bringing people together.

“I believe in the will of the people,” Plante said. “I listen to people. I am strong on the fact that I don’t have an agenda. I’m not doing this for myself. I’m not doing it to gain anything from it. I decided to run because I love this town, and I think that’s a big strength.”

Plante admits that she does not know a lot about government, but she is learning fast.

“I’m new to politics,” Plante said. “I’m just like all the other residents. I can see what’s going wrong, and I need to figure out how to fix it, and I’m willing to learn. I have been reading up on everything. I’ve been going to council meetings. I’ve been talking to people behind the scenes trying to get a better handle on things. I don’t know a lot about government, but I do want to learn and do what’s best for everyone.”

Plante believes that commercial development should be limited to Southern Blvd. and that Okeechobee Blvd. should be made more pleasant for people to drive on. “I think our number-one priority should be maintaining these roads in a safer manner,” she said.

Plante asked voters to support her because she will be there for them.

“I’m not here for me,” she said. “No one has ever stated to me that they moved here for more commercial, more development. I’m very passionate about not having that happen all over the place.”

Robert Shorr — Shorr did not respond to several attempts to interview him this week, but he did speak to the Town-Crier about his background and motivations for running in January.

Shorr is a member of the town’s Planning & Zoning Committee and a six-year resident of Loxahatchee Groves. He was born in Palm Beach County and grew up in Greenacres. He served six years in the U.S. Navy as a nuclear power plant mechanic on a cruiser out of San Diego. He has an associate’s degree in engineering from Palm Beach State College.

Currently the owner of his own business, Accurate Balancing & Commissioning, which tests air conditioning and water pressure in buildings, Shorr has worked at the Palm Beach County Facilities Department as an electrician, utility operator and project manager, and the Department of the Interior at a wildlife refuge.

Shorr said he got involved with council meetings about a year and a half ago and feels that there is a need for fresh faces on the council because council members tend to get complacent after serving a while.

Having sat on the South Florida Fair’s board of directors for 20 years, Shorr also sits on the state board for the Environmental Balancing Bureau, which tests air conditioning systems and commissions building performance.

Shorr owns a home on five acres, where he has horses, pigs, chickens and cows. He is married with two grown children, a granddaughter and two grandsons.

Shorr said he enjoys attending council meetings and looks forward to serving. He has stated that his top priority is keeping the town, a town and keeping out housing developments.

He does not favor calls to disband the town, noting that if Loxahatchee Groves had not incorporated, the county would have allowed large parts of town to be subdivided and developed. However, the town needs to develop a vision and a master plan for the future instead of just reacting to things that occur.

Shorr hopes to get into office and help the town look at its infrastructure and see what it will take to improve it. He feels draining and maintaining the roads is the most important priority in town and that it should develop a plan that is affordable, doable and based on the intensity of use.

Shorr noted that the town is finally putting in a lot of drains, but he doesn’t agree with its methods, and he believes the town’s road paving program is also misdirected.

He wants Okeechobee Blvd. to have traffic calming to discourage through traffic. He feels that people should know they’re driving through the middle of Loxahatchee Groves, and if they don’t want to see roundabouts or other types of traffic-calming devices, then they shouldn’t take that road.