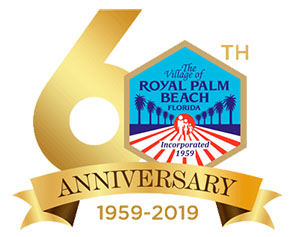 “The reception at the Cultural Center will be really nice,” Assistant Parks & Recreation Director Mike Mikolaichik said. “For the 60th anniversary, we created an event that pays homage to some of the people who paved the way for the village.”

The event is open to the public, and Village Manager Ray Liggins invited all residents to attend.

“From 4 to 5 p.m. there will be live music in the background with photos of the village and people displayed on the screen,” Liggins said of the event.

With light fare, hors d’oeuvres and beverages, Mikolaichik expects it to be a very enjoyable affair. “It is a good time to socialize, and the guitarist, Ron Oliveire, is very good,” he said.

Following that will be a presentation slated to last about an hour.

“From 5 to 6 p.m., we will recognize our honorees,” Liggins said, adding that Mayor Fred Pinto will serve as master of ceremonies. “It will be a short reception with a thank you and recognition.”

Each member of the Royal Palm Beach Village Council, along with Liggins, nominated someone who has made a significant contribution to the village to be one of the 60th anniversary honorees. The selected honorees are Jackie Larson, Dan Splain, Phyllis Katz, Jess Santamaria, Rob Hill and Diane DiSanto.

The honorees are profiled in the Royal Palm Beach 60th Anniversary Souvenir Magazine being produced by the Town-Crier in cooperation with the village.

Liggins is hoping for a good turnout at the anniversary celebration.

“There is no way to know how many people will show up,” he said. “I mean, we invited all 40,000 residents. However, we planned hors d’oeuvres for the first few hundred.”

The event will also include the public premiere of the new Village of Royal Palm Beach promotional video that has been in the works for months and has been previewed at council meetings.

Besides the June 30 reception, Royal Palm Beach will also celebrate its 60th anniversary with a commemoration during the annual Star-Spangled Spectacular Fourth of July celebration and fireworks display at Commons Park.