Hundreds of people flocked to the Community of Hope Church’s Loxahatchee campus Sunday, Oct. 20 as it hosted its seventh annual Pumpkin Chunkin’ event. Teams equipped with homemade catapult contraptions competed for the trophy. One team had to forfeit due to technical difficulties, but four teams shot 5-pound pumpkins spiraling across the sky. One catapult, the Mac-daddy Humdinger Pumpkin Flinger, rolled out victorious. With the help of his friend Eric Mitchell, Jeff MacIntosh built the trebuchet that clinched the competition with a winning 582-foot launch. Event goers could also enjoy a plentiful pumpkin patch, which remains open through Halloween. For more information, visit www.communityofhope.church/pumpkin-patch. PHOTOS BY MEREDITH BUROW 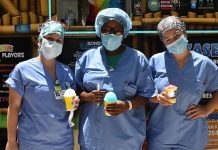