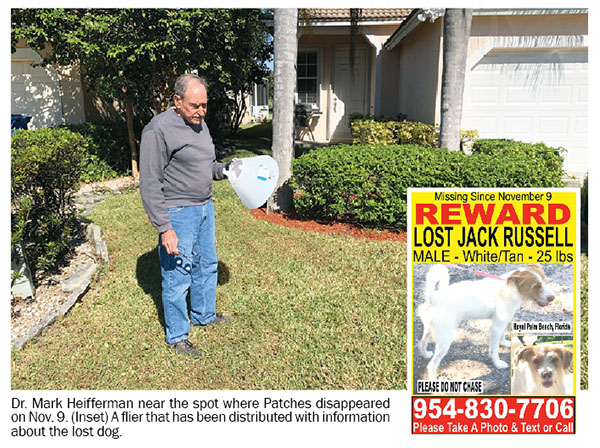 Patches is skittish, doesn’t know his name, doesn’t know where he is, and is wandering lost and scared somewhere near Royal Palm Beach.

Retired Royal Palm Beach dentist Dr. Mark Heifferman is heartbroken and asks Town-Crier readers to keep an eye out for the lost white-and-tan Jack Russell terrier, take a photo and report any sightings.

It has been a rough year for Heifferman, but even a rougher couple months for the 25-pound cutie now known as Patches. He was found filthy and starved near the Miami International Airport. Friendly animal activists noticed his plight in the high-kill Miami shelter and arranged his transfer to Tri-County Animal Rescue in Boca Raton. That’s where Heifferman fell in love with Patches and adopted him on Nov. 9.

“I was nervous and excited all at the same time. The adoption went smoothly,” he said. “My sister had wonderfully offered to drive, so I could care for Patches on the hour-long ride back to Royal Palm Beach. The two-year-old dog joyfully jumped into the car, immediately sat on my lap, and gifted me with kisses on my nose and lips. We had both just been through a lot, and I felt exactly as if the universe had gifted me, and him, with the new best friends that we both desperately needed.”

Heifferman, who is recovering from a stroke, lost one dog to old age near the beginning of the year. In August, he had to put down his 15-year-old Shih Tzu. That dog had lived with him for 13 years but spent the last several in a dog wheelchair due to paralyzed hind legs.

“I was devastated when the vet told me it was time to put down Stormy,” he recalled. “I was grieving, then received even more bad news when my doctor told me my cancer had come back, and I needed five days of chemo for six weeks.”

With chemotherapy finished, Heifferman, who lives alone, celebrated by adopting Patches. “I genuinely love dogs and have had them around me my whole life,” he explained.

The adoption took place on Nov. 9. The ride back to Royal Palm Beach from the shelter exceeded all of his expectations, as Patches seemed content and calm in his lap. But trouble started the moment he hit the ground in the Country Club Views neighborhood off Royal Palm Beach Blvd. just north of Publix.

“I am not sure if he was excited by the sight of my kind neighbor in her wheelchair, or whether he heard something that spooked him, but he slipped out of his collar and took off as soon as we arrived home,” he said.

Patches seems attracted to heavy brush and canal banks and took off running in the direction of the nearby Village Golf Club.

An army of volunteers using drones, social media, fliers and baited traps has been searching ever since with several confirmed sightings. Anyone spotting Patches is asked to take a photo, and text or call Heifferman at (954) 830-7706.

“This story tugged at my heart,” animal lover and volunteer Jessica Brendt said. “I heard about Patches on the Loxahatchee Lost and Found Pets page on Facebook, and I coordinated with Dawn DiBari. We have both logged long hours baiting and tending traps near where the few confirmed sightings have taken place. Let me tell you this, a huge, lonely golf course is a scary place to be at three in the morning, especially when you are baiting traps with rotisserie chicken and know that coyotes, bobcats, alligators and other critters might be lurking in the shadows.”

Professional Pet Detective Jamie Katz has donated her time to help give Heifferman the best possible chances of finding Patches. Hundreds of fliers she designed have been distributed in the area, a reward for Patches has been broadcast on social media, and animal control and rescue groups have been alerted.

A neighbor with a drone helped with response to a golf course sighting, and a volunteer in a boat patrolled near where Patches was spotted along a La Mancha area canal.

The campaign so far has produced several confirmed sightings of Patches, but none in almost three weeks since he was spotted near the Madison Green Country Club. While a few crank callers have reacted by phoning in nasty messages, and the team wasted precious time hunting down a hound that resembled Patches, the community at large has been very helpful.

“This series of events has shaken me. I can’t sleep wondering if Patches is starving somewhere in the bushes or whether someone might have stolen him. I beg readers to take a photo and report any sightings,” Heifferman said. “If I get another confirmed sighting, I will hire professional trappers. So, please, take a picture. Please, help me find Patches.”