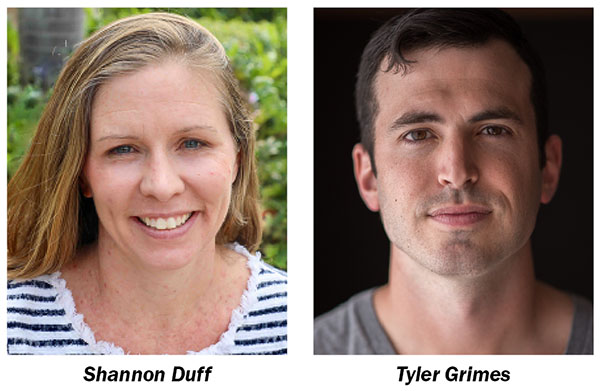 Duff earned a bachelor’s degree in history at Yale College and an MBA from the Yale School of Management. Between undergraduate and graduate studies, she worked as an analyst and later associate in a principal finance group at Lehman Brothers in New York. During business school, she worked for Yale’s Office of Undergraduate Admissions. She has also taught and provided academic support in K-12 schools in Maryland and at the Pine School in Hobe Sound. Duff is an avid runner and was the captain of the Yale women’s cross-country team and earned nine varsity letters in track and cross-country. She ran the New York City Marathon in 2005 and finished 32nd among American women.

In addition, Oxbridge has named Tyler Grimes as the distinguished visiting artist in musical theater for the 2019-20 school year. Grimes will collaboratively teach the honors performance ensemble class and direct the annual school musical. He will help budding artists develop their talents and provide challenging opportunities for accomplished students to enhance their acting techniques, choreography/movement skills, knowledge of musical theater, origins and history of theater, and classical theater.

Grimes is the managing director of the Lovewell Institute for the Creative Arts in Fort Lauderdale, which conducts musical theater workshops with schools in cities around the globe. Prior to joining Lovewell, he was a high school and middle school theater teacher at the Somerset Academy Arts Conservatory in Pembroke Pines, and a teaching artist and director/choreographer in New York City. Since 2016, Grimes has served as the co-sponsor of District 13 Thespians, responsible for attending state board meetings, organizing district individual events and one-act festivals. He has a bachelor’s degree in educational theater with a minor in dramatic literature and Shakespeare from New York University.