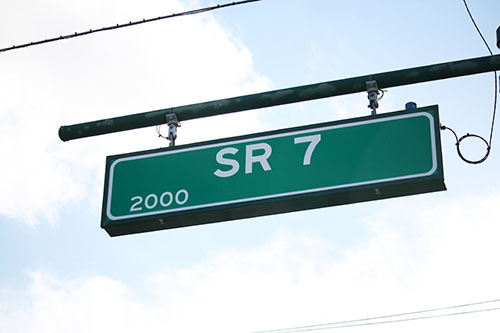 The Indian Trail Improvement District hosted a public meeting on Tuesday, Feb. 11 at Seminole Ridge High School about the recent deletion of State Road 7 from the long-range transportation plan by the Palm Beach Transportation Planning Agency.

The TPA’s next board meeting is on Thursday, Feb. 20 at its new office at 301 Datura Street in West Palm Beach. At that meeting, officials from the western communities hope to get SR 7 back on the map.

Argue said the purpose of the meeting was to get input from members of the public to show local support for the extension of SR 7 to Northlake Blvd. About 60 people attended the meeting.

Argue explained that the SR 7 extension had been on the long-range thoroughfare map for decades before the TPA board voted to remove it in December.

“As a result of that, we need to get it back on the long-range thoroughfare map, and the way to do that is to show our support,” she said. “I know that many of you have been along since the beginning of this battle, advocating for this road, showing up for many different meetings and giving your comments, and we’re asking you to please do it again.”

She noted that everyone had been given a form asking for comments to be submitted at the TPA meeting. The TPA web site also has a link at www.palmbeachtpa.org/forms/lrtp-amend-1 where residents can submit their input.

McKinlay said the area affected by SR 7 is special because it includes many active and retired law enforcement officers and firefighters. She asked them to stand and lead the audience in the Pledge of Allegiance.

“What happened in December is when we were getting ready to approve the final long-range transportation plan, the City of Boca Raton decided that they wanted to remove eight projects from the long-range plan at the last minute as an amendment,” she explained. “When that amendment was brought forward, Joe Peduzzi, who is a commissioner for the City of West Palm Beach, saw an opportunity. He said, ‘If they can make an amendment, then I can make an amendment, too.’ And he made an amendment to remove State Road 7, in addition to the eight projects from Boca Raton.”

McKinlay said that the county has been in a struggle with cities on the coast over impact fee revenues and how those revenues are going to be collected and spent.

“The City of Palm Beach Gardens has led that charge, that they shouldn’t have to collect impact fees for road improvements anymore, and they want to institute a mobility fee to do an alternative transportation plan for the east coast of this county,” she said.

This puts people in the central part of the county at a severe disadvantage, McKinlay said. “Our networks are not completely built-out yet, and we need to make sure that we complete those networks so that everybody in this county can move around,” she said.

She believes that the 9-8 vote deleting SR 7 was not so much opposition to the road, as it was resentment toward the county for imposing impact fees on new development, although most of the cost for completing SR 7 would come from state and federal funds.

“Our concerns are, what were the impacts to the rest of this plan when you remove these major road projects?” McKinlay asked. “It affects all the little pieces, and it is going to have a domino effect.”

McKinlay said she hopes to introduce an amendment at the Feb. 20 meeting to get SR 7 back on the map. She added that there is a chance that the amendment will pass, explaining that one member who voted in the majority was confused as to what she was voting for. She added that the Port of Palm Beach, whose TPA member voted for the removal of SR 7, recently passed a resolution supporting SR 7, and pointed out that a majority of the five county commissioners sitting on the TPA board support the SR 7 extension, and the county strongly supports getting the road back on the plan.

She urged those attending to submit comments to the TPA supporting the road if they cannot attend the meeting.

“It’s hard to get to these meetings,” McKinlay said. “I get it. They start at nine o’clock in the morning, and they’re downtown, but if we don’t show a significant number of people in support of this project, we could be at risk.”

She warned that the new TPA office is relatively small, with about 90 chairs, and finding parking is difficult.

“If I lived in The Acreage, I would be frustrated trying to get to that kind of meeting,” McKinlay said. “You are just as effective submitting those comments online or in writing as you would be if you showed up there that morning.”

Ricks said the SR 7 extension is critical to the roadway network, although the county has several significant road projects planned or underway in the western communities.

Uhren pointed out that the county also has a transportation plan independent of the TPA that has not deleted the SR 7 extension, although it must be in the TPA plan in order to receive state and federal funding assistance.

Sayre pointed out that a private road to Ibis already exists on the east side, which he said negates the City of West Palm Beach’s assertion that a road there would endanger the city’s water catchment area.

During public comment, Rich Vassalotti, a retired Palm Beach County Fire-Rescue firefighter and 25-year resident of The Acreage, said he has seen the frustration of area residents trying to get in and out of their communities.

“This road is so vitally important, and what is so awful about this, is the absolute hypocrisy of the City of West Palm Beach and Ibis,” Vassalotti said, recalling that the city built Ibis, Andros Isle, Baywinds, Ironhorse and Riverwalk on the shores of the water catchment area. “All that is on their drinking water. There is a dump, a land fill, next to the Grassy Waters Preserve, [but] that’s OK.”