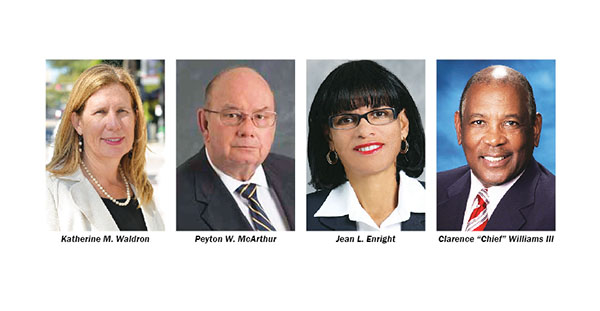 The port is a special taxing district that includes much of central Palm Beach County, including nearly all of the western communities. The port commission is made up of five members serving rotating four-year terms.

Given its territorial makeup, the port commission has traditionally elected Democrats to the commissioner posts, so the primary victors will be favored to win the general election. The winner of the Group 2 race will face Mike Whalen with no-party affiliation and write-in candidate Robin Rance-Hoffman in November, while the Group 3 winner will face Republican Roderick Clarke and write-in candidate Albert Heyward.

Group 2 Incumbent Katherine Waldron — Waldron is a businesswoman who has been an executive with Fortune 50 companies and has founded small businesses. She is a graduate of the University of Virginia and has an MBA from Palm Beach Atlantic University. She is about to complete her first four-year term as a port commissioner.

“The port is a major economic driver for our community, so business acumen is important to the proper governance of the port,” Waldron said. “I am running for my second term because I am even more excited about continuing my efforts and accomplishments from my first term. While on the dais, I have protected the environment, promoted the port as a major commerce center and encouraged the port to play a larger role in our community.”

Waldron said the important reasons a citizen should vote for her are based upon experience.

Waldron also wants voters to know where she stands on the issue of dredging.

“I am against a deep dredge that is not needed and would harm our ecosystem,” Waldron said. “I have always supported the necessary maintenance dredging the port does on an annual basis to keep our shipping channels clear.”

Group 2 Challenger Peyton McArthur — McArthur served seven years as the director of human resources at the Port of Palm Beach and four years as a port commissioner from 2014 to 2018. He holds a master’s degree in public administration from the University of Florida.

“I am concerned about the direction of the port, specifically the need for dredging,” McArthur said. “The port is now under draft restrictions several months a year.”

McArthur listed the three most important reasons a citizen should vote for him as, “Experience, commitment to the position — I will not resign to run for another office — and a pledge to update the port charter and to provide term limits and an inspector general.”

“The port investigated the feasibility of an inland port about 10 years ago,” McArthur said. “To make an inland port feasible, you need land in the Glades, extension of the railroad, $250 million in money and imports that need to be dispersed throughout the state. The Port of Palm Beach has none of these.”

Group 3 Incumbent Jean Enright — Enright has been a member of the port commission since 2005. She cites her experience as a major qualification for the job.

“It’s an honor and privilege to serve as port commissioner. During these challenging times, our COVID-19 pandemic situation makes it clear that my leadership, port experience and vast knowledge of port operations at the Port of Palm Beach in our community is needed,” Enright said. “My extensive knowledge of federal guidelines and a strong relationship with port tenants, users and industry officials, truthfulness, integrity and fortitude are needed in these uncharted waters at the port.”

She said that she supports job creation, without the need to levy taxes, and enhanced safety and security initiatives of the area, as well as environmental protection activities.

“I am running for re-election to continue my work to meet the port’s priorities and challenges during this unprecedented time while further strengthening the port’s position as a leading economic engine for Palm Beach County,” Enright said. “As a port commissioner, my vast knowledge of port operations has helped to develop the policies that have sustained the port through economic financial crisis and security challenges. My support for environmental initiatives has helped protect marine life and provide sand to our local beaches.”

Group 3 Challenger: Clarence “Chief” Williams III — Williams has more than 40 years of public service, primarily at senior management levels, with the last 16 years as police chief in the City of Riviera Beach. He practiced law for eight years in the areas of employment law and civil rights.

“I also understand what it means to maintain a safe and secure entryway into our county and our country, particularly as it relates to the Port of Palm Beach,” Williams said.

Williams said that he is seeking the position because port authority districts were created by the legislature to be regional economic engines.

“I am running to maximize the economic muscle of the port for all communities within its reach, from the Atlantic Ocean to Lake Okeechobee,” he said.

He urged voters to choose him because he is qualified and prepared for the job. “I have a vision to expand the economic impact of the port and to partner with schools to develop future maritime professionals, Williams said.

Williams supports building an inland port in the western part of the county, creating jobs and business growth opportunities, and he supports building “a world-class aquarium and transform the waterfront communities near and around the port.”

“Our port must move from being a great landlord to a great economic development champion,” he said, noting that he has received endorsements from North PAC, the Palm Beach County Human Rights Council, as well as several elected officials and business and community leaders.