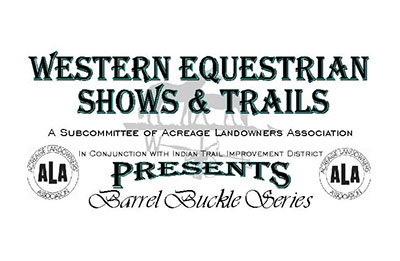 “This is going to be the first show that we’re having, and it’s going to be a barrel show,” ALA Secretary and WEST President Dixie Thiery said. “We’re going to be doing them once a month the first Sunday of every month through May.”

In the buckle series, participants build up points and receive awards at the end of the season.

“They’re going to win trophies and ribbons the day of the show, but they’ll also be accumulating points,” she said. “At the end of the year, first place will get a buckle and second place will get something a little bit different. We will award out six places.”

She said memberships and participation applications are available online or by using a QR code printed on the Buckle Barrel Series flyer to get the applications.

“Because of COVID-19, we’re not actually taking applications. We usually take entries the day of the show, but we’re not physically exchanging money and stuff, so we’re doing all the forms online,” Thiery said. “I think it will be a good turnout. A lot of people are really happy to see something come back to Nicole Hornstein Park.”

Although participants will be charged to enter the show, admission is free for spectators. Vendors will be there with tack and other equine items for sale, and a food truck will be there. A 70/30 jackpot will also be held at the beginning of the show.

Indian Trail Improvement District President Betty Argue will preside over the opening ceremonies, which will include a color guard and a “Cowboy Church” at 8:30 a.m. led by Pastor Joseph Debari. Exhibitions will be held from 7:45 to 8:30 a.m.

“We’ll do a prayer to bless the show and the showgrounds and everybody riding,” Thiery said.

On Saturday, Sept. 19, WEST will host its second clinic on equine first aid.

“That will be free, but the show is different than the clinic,” she said. “The clinics, we’re going to always make them free so that anybody who wants to join or come and watch, can.”

On Nov. 1, WEST will host a “Trick or Trot” where participants come in costume.

Memberships in WEST vary, depending on residency.

“As an ITID resident, you already are paying for the park and the upkeep of the park and the staff,” Thiery said, explaining that most of the money collected will go into an ITID equestrian fund. “This money will go to help Indian Trail improve equestrian needs, whether it be trails or signs or something like that.”

She added that WEST is planning other fundraising events to benefit the equestrian fund. “We want to keep it equestrian,” Thiery said. “This is an equestrian community.”

Search for “Western Equestrian Shows & Trails” on Facebook to find more information about the group and find the Sept. 6 show flyer.