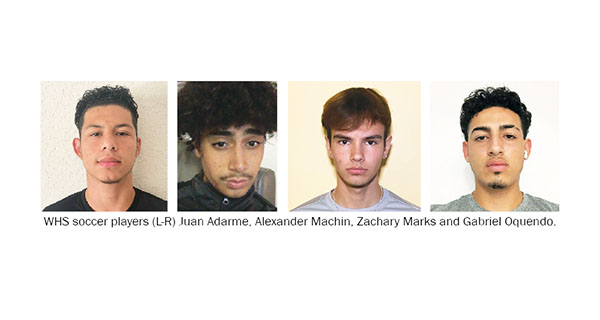 The cornerstone of a successful high school athletic team is usually senior leadership. Teams that fare well often have a group of strong and seasoned senior leaders on the squad who lead by example in both practices and games.

That is especially the case for the Wellington High School varsity boys soccer team, which has eight seniors on its current roster. They were honored Monday, Dec. 14 in a senior night home game against William T. Dwyer High School.

Even though the current soccer season started just a few weeks ago, the decision to stage senior night early was made as a way to guarantee that it would not become a COVID-19 casualty in January should the pandemic cut the season short.

“With eight seniors, we wanted to make sure that they had a chance to enjoy a senior night experience,” Wellington High School boys varsity soccer coach Chris Carrera said.

He had strong words of praise for his eight senior leaders.

Midfielder Juan Adarme has made great strides in his two years on the varsity squad.

“Juan is one of the best midfielders we have had in a long time,” Carrera said. “He can play the ball on the defensive end as well as the offensive end.”

Martin Blanca is one of the team’s goal scorers and has been scoring on the varsity squad for three years.

“With his speed and determination, he has always been a nightmare for the other team’s defense,” Carrera explained. “He’s always putting the pressure on the defense and trying to shoot on target and score.”

In many respects, Jordan Mor is probably the most physical player on the team.

“Jordan is one of the strongest players on the field,” Carrera said. “He fights for every ball and is always trying to make plays for the defense and the offense.”

Gabriel Oquendo, who plays in the midfield and as a striker, represents the heart and soul of the team.

“Not only on the field, but he is a big motivator off the field,” Carrera noted. “His intensity is contagious, and it brings everyone’s level up.”

Martin Rivera is one of Wellington’s strongest defenders. “Martin is one of my strongest pillars in the defense,” Carrera said. “His confidence and sense of play has helped our team tremendously,”

Alexander Machin is playing his first year of varsity soccer as a senior, but he is very comfortable in the highly competitive environment.

“Alexander has a great touch and vision on the field,” Carrera explained. “He is very positive and brings great energy to the team.”

Tyler Miller, a four-year member of the varsity squad and a team captain, can play on offense and defense.

“As a striker, he is very goal-oriented and is fighting for the ball all the time,” Carrera explained. “As a center back, he provides the team with tranquility in the back.”

“Zachary is a solid goalkeeper,” Carrera said. “The team knows that if we have to play the ball back, he will be able to pass the ball in a safe way.”

Wellington won its senior night match against Dwyer 3-2. Carrera credits his strong and seasoned senior leaders on the team for that victory and for many wins to follow.