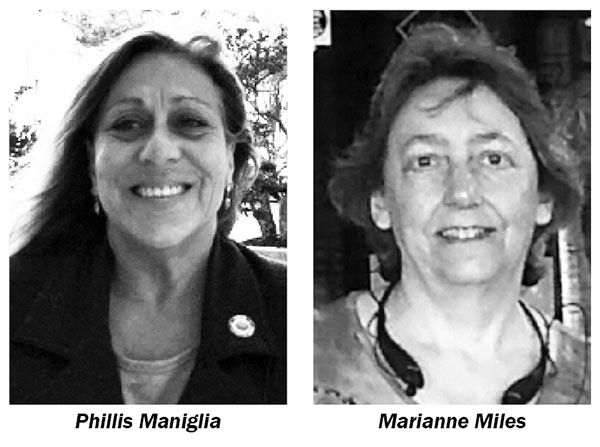 Paving proponents in Loxahatchee Groves scored a major victory Tuesday, March 9 with challenger Marianne Miles defeating incumbent Lisa El-Ramey by 14 votes in the race for Seat 3 on the Loxahatchee Groves Town Council, according to unofficial results from the Palm Beach County Supervisor of Elections Office.

Miles fared better in Tuesday’s in-person voting (228 to 204), but El-Ramey, who has been serving as mayor, was narrowly ahead among absentee voters (149 to 139). It wasn’t enough, though, as Miles appears to have captured the seat with 367 total votes to El-Ramey’s 353.

Maniglia defeated DeMarois by a slightly greater margin of 375 votes to 342 votes. They ran almost even among in-person voters, with the challenger getting a slight edge (218 to 216), but Maniglia ran stronger among absentee voters (159 to 124).

“I lost. I accept that,” DeMarois said. “I took my best shot but didn’t make it.”

Despite the loss, DeMarois, a retired firefighter and longtime fixture in Loxahatchee Groves politics, said he was pleased by the overall outcome regarding the five-member board.

“We now have three people on the council who are for [widespread] paving,” he said. “I would have preferred four. It would have made things a bit smoother, but this will do.”

Maniglia, a real estate agent, said her position concerning paving the town’s miles of dirt roads has been repeatedly and intentionally misrepresented.

“If people want their road paved and are willing to pay for it, I’m absolutely willing to help them do so,” she said Wednesday. “[But] we want transparency, accountability and feasibility in these road projects. I’m going to continue to vote for what I think is in the best interest of this community.”

What is not in the best interest of Loxahatchee Groves is more traffic and further urbanization, said Maniglia, pointing to concerns that C Road could become a busy cut-through to Southern Blvd. as areas north of the town are developed.

“I want to keep our rural lifestyle,” she said. “We’re like David, and Goliath is the developers who are surrounding us.”

Miles said Wednesday that she is “really feeling kind of good about the opportunity to the people of Loxahatchee Groves” after what she felt was a disappointingly negative campaign waged against her. “There was a lot of confusion, a lot of misconceptions about what I would do,” she said. “I wanted the truth, and I spoke the truth. Now it’s time to move forward.”

While Miles is an advocate for paving more of the town’s roads, she said it must be done responsibly. “I’m not for paving everything all at once,” she said. “But I am for getting done whatever we can within the budget.”

Miles also said she hoped greater communication can be fostered between the council and the community. She encouraged residents to attend council meetings and workshops, and to participate in the process by sharing their opinions.

“I have no personal agenda,” she said. “I just hope all five council members can come together for the good of the people of Loxahatchee Groves and get our roads up to a safe, drivable level.”

El-Ramey, a Florida native and a professional in the equestrian industry, said Wednesday that she was disappointed that voters seem to have bought into the notion that the election was a referendum on paving. She said the questions for the town are much bigger and broader, including improving the town’s 100-year-old canal system and maintaining a rural lifestyle friendly to the equestrian community.

“I had a great two years,” said El-Ramey, who won a two-year term during a special election held in 2019. Looking ahead to 2022, when two other council seats will be contested, she said, “I’m already being encouraged to run… We’ll see what happens.”