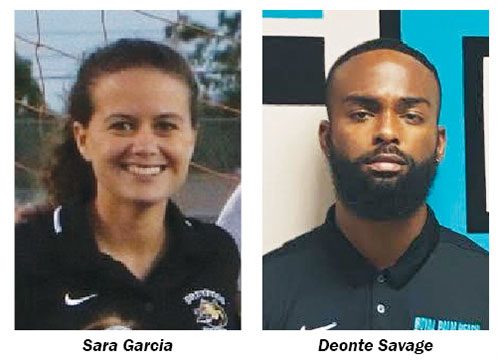 Royal Palm Beach High School has a changing of the guard for its girls varsity soccer and boys varsity basketball programs.

She is returning to Royal Palm Beach from the Dreyfoos School of the Arts, where she has served as the head coach of the girls varsity soccer team for the last four years. Her record was 26-21-3.

“We are very excited to have Sara return to Royal Palm Beach to take over the program,” Athletic Director Eric Patterson said.

Kate Murphy, the most recent head coach of the girls varsity soccer team, has stepped down from the job. Murphy’s record as head coach for the past three years was 29-18-1. She was part of the girls soccer team for the past eight years as both head coach and assistant coach. She is stepping down to focus on leading Royal Palm Beach High School’s guidance department.

“We thank her for everything she has done for the girls soccer program,” Patterson said. “We wish her the best in her new job at our school.”

Garcia is looking forward to coaching at her high school alma mater.

“Dreyfoos has been an amazing place to work, and I have been able to coach some really talented girls,” Garcia said. “But it feels like I am coming home to where both my teaching and coaching career began. Once a Wildcat, always a Wildcat!”

Marshall Riddle, Royal Palm Beach High School’s previous head basketball coach, recently resigned his position. He will be pursuing endeavors outside of education. He has been the head coach of the boys basketball team for the past two years.

“Marshall did a great job for us, and we wish him the very best as he moves forward,” Patterson said.

As the new head boys varsity basketball coach, Savage is committed to taking the RPBHS program to a higher level.

“It starts with coaching the kids hard and with love,” Savage said. “Our main focus will be on creating the well-rounded athlete. There’s more to life than just basketball. Our mission here will be to create great basketball players, but more importantly, great young men.”

There will be a theme to Savage’s practices and off-season training sessions.

“In anything we do as a program, the theme will always be: Be on Time! Be Coachable! Compete!” Savage said. “The reason for that is because those three things can translate into the real world and not just the hardwood. In life, you should always be on time for anything, you’ve got to be able to accept criticism and be willing to apply what you’ve learned. And, in most cases, you will have to compete with others as you work your way up in life.”

Savage is planning pre-season practices and conditioning this summer for his squad. “Summer workouts are a big part of what we do,” Savage said. “We will be going three to four days a week from June 21 until July 30.”