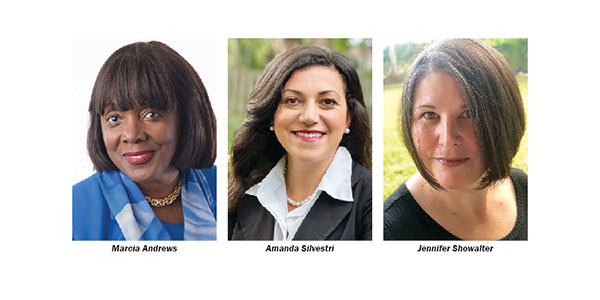 What a difference three years make. Three-term Palm Beach County School Board Member Marcia Andrews secured a new term representing District 6 in 2018 without opposition. As the 2022 cycle begins to take shape, it appears that Andrews will have several challengers to contend with.

District 6 covers all of the western communities and the Glades area. Andrews has represented the area on the school board since 2010, winning the seat after retiring from a long career with the School District of Palm Beach County.

Yet in the era of COVID-19, school boards have become political hotspots across the nation, and no more so than in Florida, where the issue of mask mandates versus parental freedoms has exploded into the headlines.

With a year to go before the primary election, three candidates have filed paperwork to challenge Andrews — Amanda Silvestri, Jennifer Showalter and Stuart Mears.

The Town-Crier reached out to each of the candidates asking why they decided to run and what they hope to accomplish.

Incumbent Andrews has not yet filed her paperwork to run but confirmed that she will most definitely be running for re-election in 2022.

“I am so proud that over all my years, we’ve had mostly As and Bs, and no D or F grades on any of the school performances in District 6,” she said. “We are high performing by Florida standards, an A-rated district. I think it’s important that I’ve got to stay in place, academically for the schoolwork, and socially for the emotional growth and mental health of the students. I truly know the community, and I have an educational background.”

Silvestri said that she is running because she is unhappy with the direction taken by the current school board, particularly during the COVID-19 pandemic.

“I got involved around the re-opening last year,” she said. “I don’t have a lot of faith in what’s going on. I don’t think it’s in the best interest of the students. I don’t think they [the students] are the priority of the current school board members. There is politics involved, and I think I would be a better fit.”

Silvestri said that she hopes to bring more transparency to the school board. “I believe that often the constituents are the last ones to know,” she said. “There will be no politics with me. I will be into communication and an equal opportunity.”

Silvestri, a Wellington resident, expressed her dissatisfaction with the current board’s recent decisions regarding COVID-19. Learn more about her campaign at www.silvestriforschoolboard.com.

Showalter is also unhappy with the current school board. Her goal, according to a press release announcing her candidacy, is “to return the voice and authority to the citizens through transparency, communication with parents and accountability, to ban all mandates, to eradicate indoctrination and restore curriculum refocusing on actual academics in a positive environment of personal responsibility and strong work ethic.”

A Wellington resident, Showalter wants more parental outreach from the school board. “The school board was elected to represent the voice of the taxpayers, and we need to establish methods of communication,” she said. “How can the board follow the will of the constituents when they make it so difficult for parents, staff and citizens to attend the meetings or send concerns.”

After the school board removed the parental opt-out from its mask mandate last week, Showalter sent a statement expressing her outrage.

“The school board has broken the law and has violated rulings from the Florida judicial system and the parents’ bill of rights, which was passed by the state legislature, and the governor’s executive order,” she said. “The department of education just held an emergency meeting this week about several counties, including Broward, which made the same violation.”

Also filing paperwork to run is Stuart Mears, who was not available to comment on his campaign. Mears has previously run unsuccessfully as a Republican for the Florida House of Representatives in District 86.