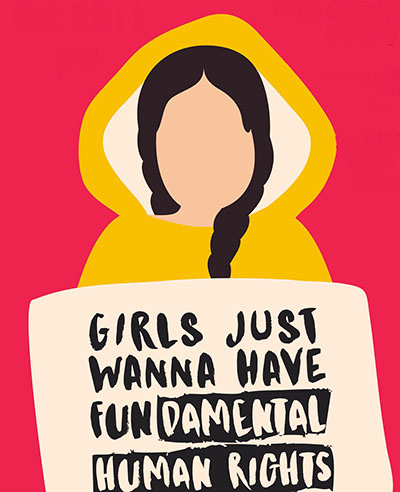 The march, titled “Girls Just Want to Have Fundamental Rights,” is being organized by Jessica Bryant, a 17-year-old junior at Seminole Ridge, who said she was inspired by her sister, Julia, who attends the University of Florida.

“A couple of weeks ago, I visited my sister in Gainesville because she goes to school there and she was volunteering [for a march] up there,” Bryant recalled. “When I was up there, I was inspired to do a march down here. I thought it would be a good way to get the kids from my school to come help out, so we decided to do one and get our voices heard, and get the younger kids involved.”

Parking will be near Gator’s Shack in the Grove Shopping Plaza, where the march will start.

“We’re going to walk down [Seminole Pratt] to the light on Sycamore [Drive] and cross over to the other side of Seminole Pratt and walk back,” Bryant said. “It’s not a very long route.”

The purpose of the march is to make people aware of new abortion laws in the nation that have been approved, such as in Texas, that would allow people to sue anyone who helped end a pregnancy, as well as bills that are in the process of being considered, such as in Florida, where a state representative has filed a bill similar to the Texas law, Bryant said.

The Texas law took effect on Sept. 1 after the U.S. Supreme Court declined to act on a request by abortion-rights groups to block it. The court’s landmark 1973 Roe v. Wade decision established the right to have an abortion. Now that the court has a 6-3 conservative majority, abortion-rights advocates fear it could be overturned when the court hears various bids by different states to overturn Roe v. Wade.

Bryant is thankful that she has a lot of fellow students helping her out in this endeavor. Anyone wanting more information can e-mail her at jessieb100604@gmail.com.

The march starts at 1 p.m. and should be over by about 3 p.m., Bryant said, adding that the march will be on sidewalks and will not obstruct traffic.