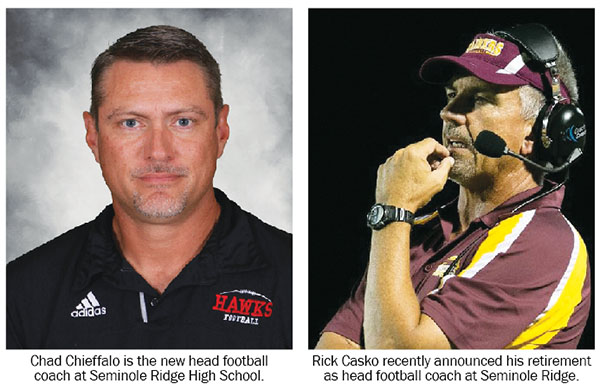 For the last seven years, Chieffalo, 44, has been coaching the offensive line for the Hawks, including the last four years under Casko. In addition to his role coaching the football team, Chieffalo has also been head coach of the wrestling team at Seminole Ridge for the past five years.

“Coach Chieffalo’s name was the first name that came up on our radar when coach Casko informed us that he was retiring,” SRHS Athletic Director Scott Parks said. “Under Casko, Chad learned under one of the top coaches in Palm Beach County history. This will be a very smooth transition, and we are excited that coach Chieffalo accepted the position. He lives in the community and is very well liked and respected by students, staff and the community at large.”

Chieffalo will step down as the head wrestling coach at the end of the current season.

Chieffalo played college football at West Liberty University in West Virginia. He has been a science teacher at Seminole Ridge for the past nine years.

Despite stepping down from being the Hawks’ head football coach, Casko is not making an immediate departure from the football program.

“Coach Casko is going to continue to consult for the varsity team and help coach the freshman football team,” Parks said.

“I don’t think it’s a good idea to make a ‘cold turkey’ transition out of coaching football,” added Casko, who will continue in his role as a physical education teacher at the school.

In Casko’s four years as the head football coach at Seminole Ridge, the team played three complete seasons and a COVID-19-impacted season in 2020 when the team only played four games and compiled a 3-1 record. In all, Casko’s win-loss record at Seminole Ridge is 23-12. During his tenure as head coach, the Hawks advanced to the state playoffs twice.

In all, Casko has coached high school football for 32 years — 21 in Palm Beach County and 11 in Georgia. His overall coaching record is 201-166.

During his 21 years as a head football coach in Palm Beach County, he was the 1993 Lou Groza Award Coach of the Year, as bestowed by the Palm Beach County Sports Commission; a seven-time Palm Beach County Conference Coach of the Year; his teams made a total of eight FHSAA playoff appearances; and while coaching at Glades Central High School in Belle Glade, two of his teams advanced to the state semifinals. Casko also had an undefeated 6-0 record in the six Muck Bowls he coached while at Glades Central in the annual battle on the gridiron against nearby rival Pahokee High School.

While those are impressive coaching accomplishments, Casko takes the most pride in helping many of his players earn a college education via football.

“I’m most proud of the more than 150 players who I coached in high school who signed college scholarships to continue playing football and get a college education,” said Casko, who played as a quarterback at Drake University from 1977 to 1980 after graduating from John I. Leonard High School in Greenacres.

Two of Casko’s coaching peers in Palm Beach County have nothing but praise for their longtime friend and coaching rival whose presence will be missed by players, fellow coaches and game officials on Friday nights in the fall.

“Rick is a winner and has been a winner at every school where he has coached,” said Brian Dodds, a 20-year varsity head football coach in Palm Beach County, five at Boca Raton High School and 15 at Park Vista High School. “Rick is known as a great offensive mind and play caller. More importantly, he coached football with great integrity. He coached his players the right way. He’s very knowledgeable and has great offensive ideas.”

Tim Tharp, who has been the head coach at Palm Beach Gardens and Jupiter high schools, agreed.

“Rick has been a longtime friend and he will be missed,” he said. “I think, first and foremost, he is a person of character and integrity. He believes in doing things the right way, both on and off the field. His teams were always well prepared. He also has a really good offensive mind and specializes in the all-important quarterback position. Lastly, I think he did a great job of relating to his players throughout his coaching career without compromising his core values. In my opinion, Rick is one of the top coaches in Palm Beach County.”