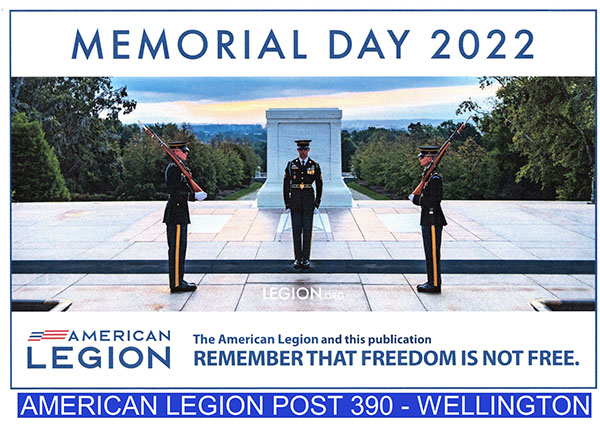 Wellington and Royal Palm Beach will be holding special events to mark Memorial Day on Monday, May 30.

The last two years saw scaled-back versions of Wellington’s Memorial Day events, but this year the village will once again host both its traditional parade and ceremony.

“We’re happy to see the community out and be able to support our local veterans and family members who served, or gave their life for us,” Assistant Community Events Director Michelle Garvey said. “We’re glad we can present something to honor their memories and their service.”

“Our event usually doesn’t last more than an hour, and we do that on purpose, so that veterans can make it to other ceremonies in the area,” Garvey said.

Former Wellington Mayor Tom Wenham, a member of American Legion Post 390, will be presenting the keynote speech, where he will be honoring Base Commander/Wing Commander Col. Sherman Beaty and Medal of Honor winner Capt. John Walmsley, who respectively were designated Missing in Action, Presumed Dead in 1953 and 1951.

He’s proud to have the opportunity to honor those who are Missing in Action, Presumed Dead. “I was part of the unit they were significant in. We all served together,” Wenham said.

Active military or retired veterans who would like to be recognized during the ceremony can contact Garvey at (561) 791-4082 or register the morning of the event.

Royal Palm Beach will hold its Memorial Day Service at 9:30 a.m. at the Veterans Park Amphitheater, located at 1036 Royal Palm Beach Blvd. Overflow parking is available at Lindsay Ewing Park with a shuttle to the ceremony.

There will be the laying of the wreath, a 21-gun salute, a battle cross presentation from the American Legion Honor Guard 11th District, a fallen soldiers’ tribute, a bagpipes presentation, and closing remarks and prayers.

The three guest speakers this year will be Johnny Castro, Hartley Barnes and Traci Caicedo.

“Both of my parents served in the Air Force, so I’ve always had veterans close to my heart,” Poyner said. “It’s a privilege of mine to be able to help host and run this event.”