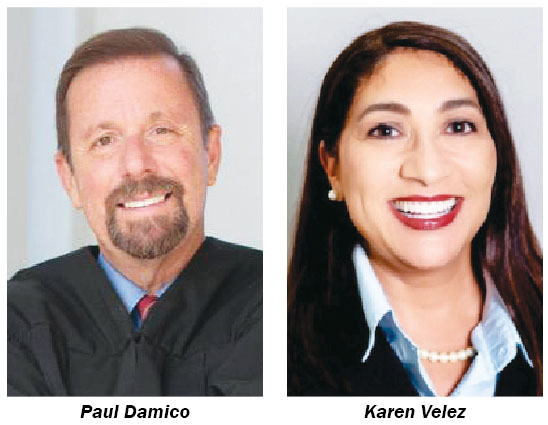 For the first time since his appointment in 2001, Palm Beach County Court Judge Paul Damico finds himself challenged for his Group 9 seat, running a race against attorney Karen Velez. Voters will have the final say Tuesday, Aug. 23 in this rare case of a sitting judge facing an election challenge.

“I’ve been a judge for 21 years. It is an honor and a privilege. I was one of 52 people up for the appointment, and I was up for re-election in 2004, only two years later. Not a member of the bar opted to put in against me,” said Damico, who repeated this process in 2010 and 2016. “But I have never believed in these 20 years that I have been entitled to have this seat. I serve at the pleasure of the people.”

Damico comes into the race with a wide array of endorsements from organizations such as the IAFF, the Human Rights Council, the Fraternal Order of Police and the PBA, the AFL-CIO and the Hispanic Political Action Committee.

“My endorsements are over the broad spectrum of everyone,” he said. “For instance, the National Organization for Women. A member of their panel came to my courtroom on a Friday, watching me preside over a domestic violence case. Saturday, I received their endorsement. I was

overwhelmed that the organization trusted me enough and looked at the qualifications and my experience and decided on me.”

Despite there being no lawyers or judges in his family growing up, Damico always knew he wanted to be in the courtroom. He moved to Florida as a child in 1968 and lived in Palm Beach County, going through the public school system and earned his law degree from the Florida State University College of Law before returning to work in Palm Beach County. He worked locally as both a prosecutor and a public defender.

Every two years, Florida lawyers are able to anonymously rate their local judges. The rating categories include knowledge, preparedness, demeanor, control over the courtroom, impartiality, efficiency, degree of professionalism, timeliness and whether they use common sense.

“The rules are you must have practiced in front of them, experienced them in the courtroom. I have been rated by the lawyers since 2001 all the way up to 2022. You can be rated one of three grades — unsatisfactory, satisfactory or excellent,” Damico explained. “Not some of the time, not most of the time, each time I have been rated as excellent in every category. These high ratings coming from the lawyers who have appeared in front of me tells us I’m doing something right. I’m very proud of those ratings, and they are important to me.”

Damico has already decided that this upcoming term will be his last. A few years ago, the rules changed to allow judges to remain on the bench until the age of 75. He will be only 68 at the end of the upcoming term, but his resolve against the rule change is enough to keep him at his original plan to retire at the 2028 election.

“Some might argue that county court judges have the most impact on the local community based on the fact that county court is where most people will appear if they ever have a legal issue,” Velez said. “The judiciary, our profession and our Palm Beach County community benefit and is best served when our leaders reflect the community they serve.”

While serving on the bench would be a new path for Velez, her first career was not in the field of law. After graduating from Brooklyn College in New York, she spent more than six years in the private sector dealing with both personal and property claims. Her employer moved her to Florida to open a new claims office. In addition, Velez is a former educator, having taught at the high school level.

“I started my legal career as an assistant public defender. For 12 years, I was in court daily, successfully managing a large docket. I’ve represented thousands of clients and was a ‘Spanish floater,’ which meant that I was assigned cases throughout the courthouse for non-English-speaking clients,” said Velez, who later started her own law firm in Boca Raton. “In my private practice, I continue to represent everyday people on their family law matters, such as child custody, time sharing, paternity and equitable distribution, as well as on criminal matters.”

Her work in the community has also garnered local support for the campaign.

“I’m particularly proud of my endorsement from the former mayor of West Palm Beach, Jeri Muoio. We met while serving on the board of directors of the Women’s Foundation of Florida together. We worked closely together on the board while co-chairing Women on the Run, which is a non-partisan training program that teaches women how to run for office,” Velez said. “I’m also proud of the endorsement from United Latinas, as they are an organization that brings Hispanic women from all walks of life together to provide support and mentorship to one another.”

It was her experience as a child watching her mother deal with a housing issue that led her to become an attorney.

“My mother went to Legal Aid for assistance, and I witnessed first-hand what excellent legal representation looks like. Law school was not preordained for me, as no one in my family had attended college or law school,” she said. “When I was in my mid-20s, I was already living in Florida. Then the 9/11 attack occurred. During that horrific event and the weeks after, I was in class helping high school students deal with the trauma and stress of the attack. It reminded me that life is short, and no one is promised tomorrow. It sounds cliché, but at the time, I took inventory of my life and decided to pursue my dream of being an attorney.”

Since earning her law degree from Nova Southeastern University, Velez has been living that dream for 16 years. “A lot has changed in our community during the last two decades,” she said. “I bring the life, work and legal experience needed in our local leaders.”

Early voting began Aug. 8, and the polls are open for the primary election from 7 a.m. to 7 p.m. on Tuesday, Aug. 23. Visit www.pbcelections.org for additional details on voting in Palm Beach County.