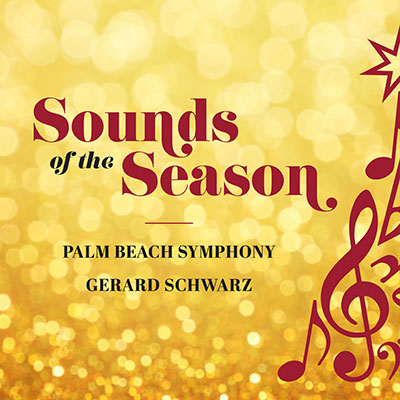 The Palm Beach Symphony recently announced the release of its first recording, Sounds of the Season, featuring holiday favorites from classical and popular music.

The release is available to stream and purchase on all major platforms and is produced by multi-Grammy Award and Latin Grammy Award-winning producer Carlos Fernando Lopez. It is distributed by LandL Entertainment and Sony Latin America.

On the recording, the symphony is conducted by its Music Director Gerard Schwarz, a 14-time Grammy Award nominee. Sounds of the Season adds to his extensive catalogue of more than 350 recordings on 11 labels, which includes The Gerard Schwarz Collection as a 30-CD box set.

“The Palm Beach Symphony has performed wonderful Sounds of the Season holiday concerts for broadcast by Sinclair Broadcasting’s digital and streaming platforms for the past three years, and the results have been so fantastic, we were encouraged to create a holiday CD,” Schwarz said. “The musicians have delivered a warm and welcoming soundtrack to the holidays that we know everyone will enjoy.”

The new release features Schwarz’s arrangement of Handel’s Concerto for Brass Quintet, Movements 2 and 4, as well as “Silent Night,” “We Three Kings of Orient Are” and Pachelbel’s “Canon in D Major,” arguably one of the most famous and recognizable pieces of classical music.

The recording offers many orchestral favorites, including “Glory to God” and “Hallelujah” from Handel’s Messiah, followed in the program by beloved melodies from Tchaikovsky’s Nutcracker Suite No. 1, Op. 71A, which include the “Overture Miniature” and spirited dances including the “Dance of the Sugar Plum Fairy.”

This first recording brings the Palm Beach Symphony to an international audience and comes during a year when concerts in the Dale A. McNulty Children’s Concert Series became available nationally on public broadcasting stations for the first time. Locally, the symphony also expanded its 2022-23 season by adding a sixth Masterworks Series concert at the Kravis Center and two concerts of Handel’s Messiah to its schedule.

“Some might consider Sounds of the Season to be the apex of this season, and I would agree that it is where all ascending lines now converge, but it is far from the peak,” Palm Beach Symphony CEO David McClymont said. “We will performing the first of five new works we have commissioned by American composers this season and plan to continue our upward trajectory in our 50th anniversary season next year.”

For more information about the Palm Beach Symphony, visit www.palmbeachsymphony.org.