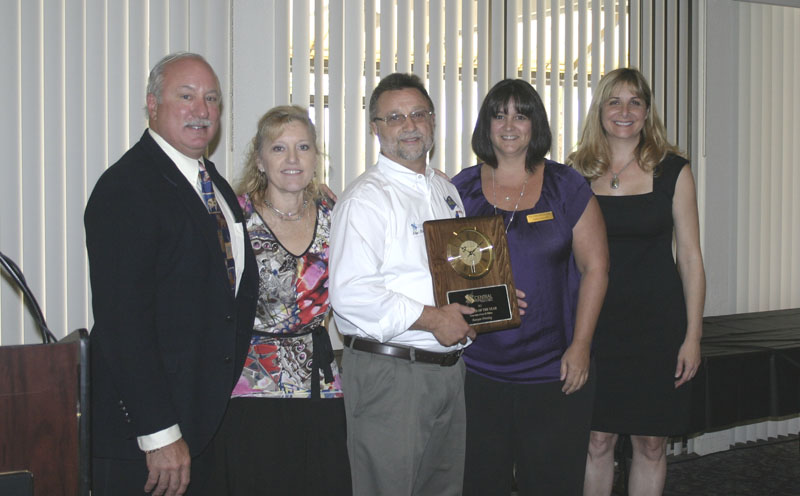 The Central Palm Beach County Chamber of Commerce recognized its businesses of the year at a luncheon Monday held at the Wellington Community Center.

To qualify, nominees must be chamber members, have demonstrated their commitment to the community and the chamber, and maintain a presence in the chamber’s service area.

“This was another tough year for the selection committee, which decided that there should be two awards for each category,” Miranda said, adding that the committee also created a new national corporate member category.

The winners for businesses with sales of less than $2 million were KPA Promotions of West Palm Beach and Quigley Marketing Group.

Joel Dowley of Two Men and a Truck, who won the award last year, introduced the winners.

Dowley said KPA Promotions owner William Brasmar attributes the success of his company to his hardworking staff. Brasmar sits on the board of the Sweets Foundation, a local nonprofit that helps children. He has volunteered for the Little Smiles annual golf tournaments and the Stars Ball. He also volunteers for other charities, but in 2010 he created his own, Ride for Charities, which produces bicycle rides to help raise money for local charities.

Sandi Quigley of Quigley Marketing Group can be seen around town helping out with the marketing needs of various charities, Dowley said. “She is very active in helping out with our local area public school initiatives and is a dedicated volunteer at her church,” he said.

Quigley also spends time volunteering with the chamber, helping with the visioning of the organization and leading in the branding initiative when the merger of the Palms West and Lake Worth chambers was announced last year. She is also on the marketing and ambassador committees, and has been previously named Ambassador of the Year.

The recipients of the award for businesses over $2 million were the Dr. Harvey Montijo of the Center for Bone & Joint Surgery of the Palm Beaches and Roger Manning of Banyan Printing.

Jackie Cesaretti of the Palm Beach Post said Manning has supported the community for 35 years. “Charities like the Kiwanis, Relay for Life, Place of Hope and Adopt a Family are just a few of the organizations that benefit from his support,” Cesaretti said. “He is always there to lend a hand at our events. He is a board member and served on the merger transition team for six months this past year to ensure its success.”

Montijo has been co-chair and chairman of the Boys & Girls Club gala in Wellington. “He became a minister and is now ministering for Stronghold, a Christian-based youth athletic outreach mentoring ministry,” Cesaretti said. “He provides summer job training internships in the healthcare business and clinical pathways for high school youth. As a member of the chamber, he served as committee chairman for Salsafest since its inception five years ago and is that event’s major fundraiser.”

The recipient of the business of the year in the new national corporate category was Republic Services, which provides recycling and solid waste collection services and solutions for residential, commercial and industrial businesses and municipalities throughout Palm Beach County.

Miranda said the organization sponsors many local events but is highly involved with the Lord’s Place, a nonprofit fighting homelessness in the county, as well as the Wellington Rotary Club, where David Unversaw, the regional manager, will serve as president this coming year.

“This organization is also a member of four chambers but chooses to be most active with the Central Palm Beach County Chamber of Commerce,” Miranda said. “The financial support of this organization has been invaluable to the success of many of our local signature events. Their municipal services manager serves on many committees, has been a board member for four years and is currently in line to serve as chairman of the board of directors in two years.”

The chamber also presented the Chairman’s Choice Award to attorney Frank Gonzalez of Gonzalez & Shenkman for his work the past year on the merger transition team to bring together the Lake Worth and Palms West chambers.

“His legal expertise was critical to the success of the merger, and his volunteer hours were invaluable and crucial for the continued growth of this organization,” said Dr. Jeffrey Bishop, chairman of the chamber.

Gonzalez is also the chamber’s chairman-elect.