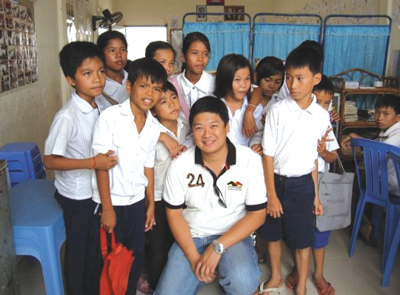 JustWorld International recently launched a new campaign aimed at making it even easier for supporters to get involved and to choose exactly which programs they would like their donations to fund.

JustWorld International is a not-for-profit humanitarian organization which funds life-changing programs for impoverished children in Cambodia, Honduras, Guatemala and Brazil.

The “Adopt a Project” campaign identifies opportunities to support a number of highly successful nutrition, health and hygiene, education, and leadership and cultural development programs, and allows donors to choose which of JustWorld’s numerous initiatives they would like to support.

The new campaign is a great opportunity for individuals, groups and businesses to get involved by taking on an entire project, helping to provide critical operational support to JustWorld projects.

JustWorld rider ambassador Angela Covert-Lawrence did just that three years ago, committing to pay for the annual salary of a doctor at a medical clinic at the Los Patojos site in Jocotenango, Guatemala.

“During my second visit to Guatemala, I had the opportunity to meet the doctor in person,” said Covert-Lawrence, a Grand Prix show jumping rider representing Canada. “He explained to me what he wanted to do, and how he was going to be able to provide the much-needed medical care for the children. I asked how much, and agreed to adopt the project right there on the spot, while standing in the middle of the clinic.”

It was a decision that would prove to be life-changing, both for Covert-Lawrence and the community at Los Patojos as a whole.

“The clinic has grown so much,” Covert-Lawrence explained, having just returned from her third visit to Guatemala. “Now the doctor is helping a lot more people. And it’s not just the kids anymore. It’s also their families and the entire community, which is huge. I would like to keep focusing on the medical clinic, helping them make it even bigger, and to provide as much support as I can in the future.”

Covert-Lawrence said that adopting a project is a great way to combine riding and competing with helping a worthy cause. “So many times we say we don’t have the time to participate, we’re too busy, but JustWorld has made it so easy for everyone to get involved. There’s really no reason not to,” she said.

JustWorld technical official ambassador Gerald Kuh of Hong Kong agrees. Kuh, who is the chef d’équipe for the Hong Kong Equestrian Team, worked with the team members to “adopt” two teachers at a school in Cambodia, paying for their annual salaries.

“The Hong Kong Team has been associated with JustWorld International for a while now, and has been actively promoting JustWorld and its cause throughout Asia,” Kuh said. “The adoption was initiated by Hong Kong Olympic rider Samantha Lam, who took the lead and called up Patrick Lam, Julie Leichle, Raena-Leunt and Milena Pappas individually to make a donation to this project in Cambodia. Donating as part of a group made the project donation comfortably affordable to each of us and reinforced our team spirit.”

The Adopt a Project campaign offers a number of different initiatives across JustWorld’s project sites. All are focused on enhancing and increasing JustWorld’s work in the areas of education, health, nutrition, and leadership and cultural development.

Examples of projects available for adoption include the PIO Lunch Program, which helps provide daily meals for a year to more than 650 children in Phnom Penh, Cambodia for $76,000 per year or $112 per child; the Compartir Mobile Library Project Literacy Development Program, which provides instruction for more than 2,000 children in Tegucigalpa, Honduras for $20,000 or $10 per child; the Natalie Johnson Center Supplies Program, which provides school supplies and textbooks to more than 130 students in Tomabé, Honduras for $8,000 or $53 per child; and the Los Patojos Children’s Clinic Support Program in Jocotenango, Guatemala for $7,500 or just $27 per child.

To learn more about Adopt a Project, visit www.justworldinternational.org/adopt-a-project. Canadian, French and American donations are all tax deductible.

Founded in 2003 by Jessica Newman, JustWorld International is a Wellington-based not-for-profit, humanitarian organization which funds life-changing programs for impoverished children in Cambodia, Honduras, Guatemala and Brazil. There are currently more than 500 rider and technical official ambassadors representing 40 different countries, whose efforts to support JustWorld’s projects have helped raise more than $4.5 million to date.

For more information on JustWorld International, or how to support the Adopt a Project campaign, visit www.justworldinternational.org.