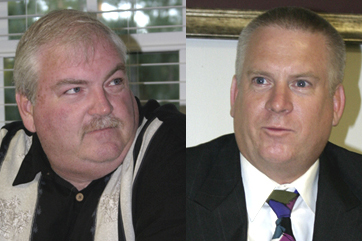 The vote is scheduled for Monday, June 25. Incumbent Supervisor Robert Snowball (above left) faces a challenge from resident Roy Parks (above right). The winner will be determined by a voting majority of the district’s “qualified electors” — registered Loxahatchee Groves voters who are also LGWCD property owners, or spouses of property owners.

LGWCD Attorney Mary Viator said the election will be different from those in the past, which were based on one-acre, one-vote. “The procedures were adopted in accordance with recently enacted legislation,” she said.

The candidates were asked to qualify through Palm Beach County’s Supervisor of Elections Office, although the voting will be managed by the district.

Viator said she and District Administrator Clete Saunier had met with the accounting firm to go through some of the issues related to the qualified elector process. Notices have been published twice informing the public of the election, she said.

On Election Day, the district office will be open for voting at 7 a.m. and remain open until the LGWCD annual meeting that evening. The ballots will be tabulated at the annual meeting, which begins at 7:30 p.m.

“Under no circumstances will the ballots be removed from the premises during this time,” Viator said. “The district will determine who is a qualified elector based on a qualified electorate database. If there is a discrepancy between the records, or insufficient information is available to determine one’s status as a qualified elector, the individual will be asked to sign an affidavit of ownership, which is authorized under statute.”

She emphasized that new property owners might not be on the list and that they should bring their voter registration card and a copy of their deed or other proof of land ownership. Qualified electors will fill out their ballots and deposit them in the ballot box, and the accountants will be asked to count the ballots twice to ensure that there are no disputes.

“Disputed ballots that cannot be resolved at the time of the election shall be marked as such and counted,” Viator said. “If the election is close and the ballots could affect the outcome, they will be reviewed and verified.”

The winner will be determined by a majority of votes cast, and the chairman will announce the winner at the meeting. The day after the election, the attorney will inform the supervisor of elections who the winner is, and that person will take office within 10 days.

Some of the issues related to the election include numbered ballots and whether they are traceable to the person who cast the ballot.

Marge Herzog, who led the petition drive to enact the election change, complained that during the referendum to determine whether there should be a qualified elector process, a similar balloting method was used with numbered ballots. Herzog said some people had been harassed after the referendum by people who she said had used the ballot number to track them.

Viator said the ballots will be coordinated by number and name only in instances where the voter’s status as a qualified elector could not be verified immediately. Otherwise, the numbers are just to avoid the possibility of anyone stuffing the ballot box. “The intent is… to have the ballots numbered so there can be verification of the actual number of ballots that were issued,” Viator said. “The ballot numbers will not be recorded for those individuals who meet the criteria as a qualified elector.”

The only coordination of a name with a ballot number will be for those who are voting with an affidavit of ownership because if there is an issue, they would need to have some type of verification. “It’s just going to be a very limited number of votes that we’ll be dealing with that issue,” Viator said.

Supervisor John Ryan said the election procedure had been set up by the board and was not necessarily in accordance with Florida code due to statutory conflicts.

“We all know that for this qualified elector process, we’re the guinea pig because it hasn’t really been used by other districts,” Ryan said. “The numbering of the ballots to me is a way for the supervisors and the accountant that we employ to verify that the individuals that have a numbered ballot have satisfied all the identification requirements to be a qualified elector. I really don’t understand that that violates one’s privacy as much as it provides an assurance that all of the ballot forms that are used to record a vote are verified as to that individual being a qualified elector.”

Ryan said he did not anticipate any meaningful amount of voter fraud, but he felt that the way the election is set up, using an accountant to count and verify the ballots is a responsible way to verify the requirements they had set up for the election.

Ryan pointed out that the ballot forms are simple and would be easy to copy, which is why they use the numbered ballots.

“I think that the level of comfort that the supervisors have, at least speaking for myself, is that we have a well-defined process that has a degree of control that doesn’t violate the privacy of an individual… It gives the tabulator a record that I think is a valuable quality assurance process.”