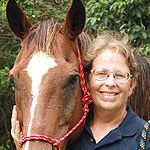 Melissa Hornung loves to play polo, and she plays well.

Originally from New Jersey, her family moved to upstate New York when she was 10, a year after she started riding. Her mother used to bring her out to watch the polo matches. Hornung became very interested, and she noticed one thing: There weren’t enough women playing on the teams.

Living in Skaneateles, N.Y., up in the Finger Lakes region, Hornung decided to take the bull by the horns — or the polo pony by the tail. She was in her early 20s, enjoyed fox hunting, but wanted to learn how to play polo. She marched into the local polo barn.

“What are you doing tomorrow?” responded barn owner Marty Cregg.

The next day, Hornung took her first lesson, and she came back every day, riding all of the horses, playing stick and ball with the pro, Caesar Jimmez, learning the game.

“Marty was very generous,” Hornung said. “He let me ride and exercise his finest polo ponies. I did that for six months, then started competing in tournaments.”

Hornung moved to Wellington in 2008 to pursue her passion.

“I wanted to throw myself into polo,” she said. “And Wellington is the best place in the world to learn and play the sport. Ricky Bostwick invited me to scrimmage or practice with his team, which was wonderful, as I don’t have any horses and playing would have been unaffordable otherwise.”

That is how she met Mauricio Devrient, who helped her refine her skills. “After 10 years of playing, I took my first formal lesson with him. He’s an excellent teacher, very articulate and knowledgeable,” Hornung said. “Step by step, he helped me improve, starting with something as basic as how to grip the mallet. These last four years, I’ve finally become a competitive player.”

Indeed, Hornung’s so successful that she and her team won the World Cup of Polo competition in April 2011.

“It was a pretty amazing experience,” she said. “It’s a tough competition, with top international players from all over the world. We’re hoping to win again this year.”

Alas, her team, although heavily favored, came in second.

“It was a great match, very exciting, and even though we did not conquer all, I feel OK losing to a team as good as that,” she said. “We lost on a penalty shot. And we get to try them again, in a rematch in Chicago this September.”

Although her team, which changes according to the sponsor, has no formal captain, she likes to pick her members based on the two most important skills: scoring and defending the goal. She chooses people who are good team players and don’t yell and scream a lot. Hornung said that women make very good polo players and are just as competitive as men.

“One of the things I love most about playing polo is growing personally and as a teammate. When you play on a polo team, you’re like separate fingers of the same hand, all working together and coordinating for a common goal. I feel an overwhelming sense of accomplishment, making a personal contribution to the team effort. It’s very rewarding. It really feels amazing, hitting the ball just right, having it all come together.”

Hornung also believes in giving back. She has become involved with the Big Dog Ranch Rescue in Wellington, and donates financially as well as volunteering her time a couple of days a week. She supports their mission to find homes for dogs. The group is her charity cause.

“Polo is a sport anyone can try playing,” Hornung said. “I know people tend to be intimidated by galloping around on horses, but they should consider giving it a try. It’s a very social sport in which you can enjoy a lot of personal achievement.”