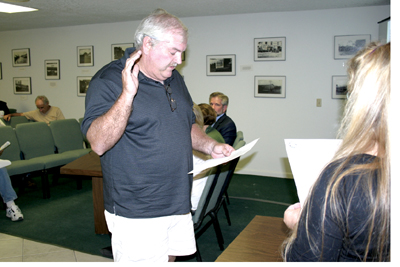 Qualified electors are registered voters who also own property, or his or her spouse. One of the five LGWCD supervisors is now elected under this method, in place of the traditional one-acre, one vote method.

Snowball, a 12-year board veteran, had said initially that he didn’t intend to run again because he felt the board would eventually be absorbed by the town.

Snowball said he appreciated the support that he had been given. “I was surprised at the number of people who wanted me to stay on that board, so I promise to do my best for them,” Snowball told the Town-Crier on Wednesday.

Snowball, who had predicted that only about 100 voters would show up to vote, said he was also surprised at the turnout of 198, which at an estimated cost of $7,000 to hold the election, amounted to about $35 per vote.

Snowball said he also appreciated the support of his campaign workers, who included LGWCD Supervisor John Ryan, Loxahatchee Groves Vice Mayor Jim Rockett and Loxahatchee Groves Councilman Ron Jarriel. “Those guys worked hard to keep me on,” he said. “I was completely surprised at how many people wanted me to keep that job, so I’m going to do it for them.”

Snowball said he also considered the added expense of the separate qualified electorate process for one board member, approved in a referendum by qualified electors last summer, to have been a “total waste of money.”

Ryan, who had walked the local bill through the legislative process although he was opposed to it, said he was happy to see Snowball re-elected, despite the new voting method.

“We’ve got a very experienced supervisor re-elected for another three years,” Ryan said. “He’s spent 12 years and developed quite a learning curve for all the district personnel and operations. We’re facing a lot of changes. We’re trying to work things out as positively as we can with all the residents, who have divergent views. We’re trying to listen and make the best decisions that we can.”

Ryan said the board has worked together to get the OGEM road paving done, which required a legislative act that ran into opposition from some residents and also complaints about the speed bumps after they were paved, which drew Snowball’s ire during one meeting when he stated that holding the position was not worth the frustration.

“I think we’ve had to consider with these roads safety issues and liability exposure issues that we take very seriously, and we’ve got some people who only look at the speed humps as a nuisance,” Ryan said.

Ryan said he thought it was ironic that the board went through a complex and expensive process to change the election method for one supervisor, yet the configuration of the board did not change.

“I regret the fact that we had to spend an awful lot of time and money to deal with a state statute regarding the qualified elector,” he said. “It was a very expensive and complex statute to comply with, and the best information we could get, no other district had undertaken to fully comply with the statute and to go through the process of implementing it.”

Ryan noted that board members all understood that a qualified-elector process was not the same as a conventional popular vote.

“I think there were a lot of people who thought it would be a conventional popular vote where you just needed to be a registered voter,” he said. “I think that some of the people who promoted the implementation of this statute and the qualified-elector process, I don’t think they really understood how restrictive it was, and how many people would be effectively disenfranchised, or otherwise not permitted to vote in the way they conventionally think of popular voting.”

Ryan added that he feels the one-acre, one-vote process represents a more equitable result for the district, since district assessments are based on acreage.

Above: Supervisor Robert Snowball is sworn in after the results were announced at Monday’s meeting.