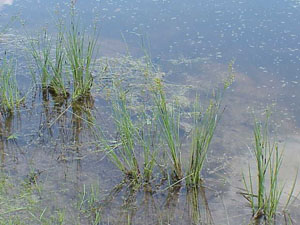 Residents complained to the Royal Palm Beach Village Council last week that efforts to control aquatic plants have left local canals littered with dead vegetation, while others blamed recent village changes for the damaged condition of a community lake.

Christine Walker of Huntington Woods Lake said she bought her home 11 years ago after she saw the lake. “My lake now has turned [into a] brownish-green swamp,” she said at the Thursday, June 21 council meeting.

The lake has fallen victim to the discharge of stormwater from Royal Palm Beach Blvd., said Walker and her neighbors.

She noted that she taught her grandson to fish in the lake. “He doesn’t fish anymore because he doesn’t catch any fish,” Walker said. “I fish for bass, but I, like my neighbors, have not been able to catch any bass in my lake for a long time.”

Walker said she believes that the stormwater discharges into the lake after improvements were made to Royal Palm Beach Blvd. were causing the problem. She was also concerned that the runoff could make her neighborhood more prone to flooding.

Phil Steinberg of Parkwood Drive said that before the construction, stormwater collected in the swales, which allowed the lake to absorb the runoff more slowly, but then curbs and gutters were put in and a bigger pipe was installed that emptied the stormwater from Royal Palm Beach Blvd. directly into the lake.

Steinberg said they had the water tested, which showed heightened pollutant levels.

Village Manager Ray Liggins acknowledged the community’s concerns and said that Village Engineer Chris Marsh had been looking into the situation.

“The claim from the property owners has been that the change in the configuration has caused this problem,” Liggins said, adding that the village has the legal right to drain into the lake and pass water through to the M-1 Canal. “That’s the way the development was developed, with that permission.”

Nevertheless, Liggins said he is not yet sure if the new configuration is to blame and that the village will be looking into possible solutions to help the lake’s condition.

It is true that the lake has been clouded up by sediment and other floating particles, he said. “We need to look at what’s causing the turbidity in this lake, and if, in fact, it is this larger pipe, there may be some things we can do to slow the water down, and not create a flood hazard,” Liggins said.

Marsh stressed that there is virtually no possibility of flooding because the additional flow from the road is minimal compared with the capacity of the lake.

Liggins said the village would also look into whether silt and dirt has gotten into the pipe during construction, emptying into the lake after recent heavy rains. “If that’s the case, we’ll get [the contractor] back out there and clean that pipe out and keep this from happening,” he said.

Bob Carter of Pepper Tree Crescent in the Cypress Head community said he thought the main problem is the M-1 Canal.

“The vegetation in there is getting impassable for a boat,” he said. “It stinks, breeds mosquitoes and it’s a hazard.

Carter added that the vegetation is also floating into the finger canals. “On the Fourth of July, we’re going to have people coming in there in boats, but it’s not passable,” he said.

Liggins affirmed there is a lot of vegetation in the canals and the village has a contractor to maintain them.

“The performance level in his contract is not being met,” he said. “The density of the growth in the canals is greater than what it should be based on chemical treatment.”

Liggins said there are several reasons why the growth has gotten to the point it is, including the heat along with the shallowness of the canals, which allows ample sunlight. He noted that the M-1 Canal is not part of the vegetation contract and is under the jurisdiction of Indian Trail Improvement District, explaining that Public Works Director Paul Webster was recently able to get ITID to hire the same contractor to treat it and coordinate the process.

Dead plant material on the surface is evidence that the treatment is working, Liggins said. He added that the water quality is good in the canals.

Webster said harvesting is the last resort because most of the plants can propagate from broken stems. “When you harvest them, you’re breaking them up,” Webster said. “Much of that biomass you’re taking out, but you’re still propagating.”

He said the dead plant material on the surface is the result of the chemical used, which kills the invasive plants at the root, causing the plant to float to the surface. The treatment also takes about a month because the chemicals can be used on only half of the water body at a time.

Andrew Getz with Clarke Aquatic Services said he has had a harvester in Royal Palm Beach and plans to put one in the M-1 Canal.

He said they intend to get the system to the point where it is controllable for the long term.

“We do have immediate short-term strategies for harvesting, which is to get the vegetation off the top of the water,” he said. “We’re doing everything we can to make it look good for the Fourth of July.”