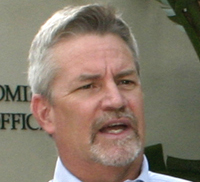 Vice Mayor Fred Pinto said he thought Liggins is carrying out all the duties expected of him as the chief executive officer, running village operations on a day-to-day basis.

“We are operating on a sound fiscal platform with a game plan for the future, not just going year by year, but we actually are looking five years down the road, in terms of what we do from a fiscal management standpoint,” Pinto said.

Pinto said that Liggins is meeting the strategic goals of the village and is effective in ensuring that the policies and the guidance of the council are being implemented. “I think he’s doing a tremendous job,” he said. “We’re fortunate to have him here in this position.”

Pinto pointed out that Liggins will be receiving recognition as a credentialed manager from the International City/County Management Association (ICMA) in July.

“This is not an easy certification to achieve,” Pinto said. “To even be considered for this recognition, you need to demonstrate to a peer group that you have operated in an exemplary capacity for over nine years. That speaks to the amount of experience and leadership and background that our manager brings to this position.”

Pinto said Liggins is among 24 other managers from across the country who will be receiving the certification this year. “They are from 18 different states as far away as Oregon,” he said. “By being a member and participating in an ICMA program, it requires you as a professional to keep your credentials up to date and be part of a continuing education program.”

Councilman Jeff Hmara said that before he took his position on the dais three months ago, he had believed that village residents were fortunate to be living in an exceptional, family-oriented community that has a solid foundation of well-delivered public services.

“Over the past three months, this basic impression has been significantly reinforced by my experience with Mr. Liggins,” Hmara said. “I believe that we’re so much better off than other communities. One reason is the village staff is solid, well-motivated and effective, and to a large extent I believe we owe this to the effective management and leadership of Mr. Liggins as our village manager.”

Hmara said he trusts Liggins to do his best for the village, although he felt there is room for improvement in some areas, such as community relations.

“Mr. Liggins has done very well under some very difficult circumstances, but I believe that we all would be well-served by more extensive public engagement, especially where significant issues such as developmental reviews and the growth of our village are concerned,” Hmara said. “I’d like to see us leverage best practices in areas of outreach and more effective public engagement.”

Councilman Richard Valuntas rated Liggins high in all areas. “I’m really impressed with Ray’s work, and I’m happy he’s working for us here in the village,” Valuntas said. “The only thought would be something that’s only partially under his control — some of the contracts. We go low-bid contracts and we get stuck with low-bid contractors sometimes, the main one being the Royal Palm Beach Blvd. north of Okeechobee… However, I appreciate the work you’re doing.”

Councilwoman Martha Webster credited Liggins with leading in some significant accomplishments the past year. “The job has been good, and as always I’m looking forward to the future because I believe in our community and working together, we will continue to make a good difference,” Webster said.

Mayor Matty Mattioli said he spends a lot of time at the village offices and has seen that Liggins is a hard worker. “He never stops working to improve our village, and that takes a lot of dedication,” Mattioli said. “He’s knowledgeable; he can tell you every statute in the state by now. The only objection I have, and I’ve told him, and I’ll say it again, that you’re not an engineer anymore; you’re a manager. Get out of the box. Don’t say no to everything. Maybe there’s a way around it.”

Mattioli said he sees the daily operations of the village going efficiently. He added that he is especially impressed with the work on the budget, which is coming up for review in a few weeks.

“It was not an easy task, and you told me it was not as major as you thought it was going to be, which is good to hear,” Mattioli said. “Basically, Ray, I think you work sometimes harder than you should, but I’ve been very happy with you and have the privilege to see you every day.”

Mattioli added that Liggins had told him he was not looking for a pay raise, but that if the other employees get a pay raise, he should get the same thing.

Liggins thanked the council members for kind comments and said village management is a team effort.

“The work that has been done this year was by the whole team,” Liggins said. “I am very happy and proud to work for Royal Palm Beach and with all these people. The system does work very well, and it does serve the residents very well. I just appreciate the opportunity to be on that team and to be working with you.”