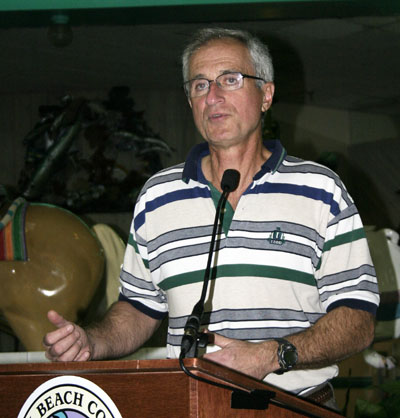 Weisman said he faced similar challenges in 1992 when property values did not go up and he had to lay off some employees. “After that, we went through the rest of the ’90s with a slow and steady increase in property values,” he said. “It was a good raise of between 2 and 5 percent every year, and the county commission did not raise the millage rate over that time.”

Around 2000, the demand for housing increased dramatically. “Property values started to go crazy through 2006,” he said. “Property values started going up 6, 8 and 10 percent every year. The county dropped the millage rate a little bit, but the county’s revenues increased a lot, because we didn’t drop the millage rate as much percentage-wise because the valuation was going up, so we had some very big increases in the overall taxes.”

In 2006 and 2007, the county hit a brick wall and property values dropped sharply. “There were also a lot of machinations that occurred with the state legislature, public demands to reduce taxes, more exemptions, which further changed the county tax structure,” Weisman said.

He said exemptions such as the homestead exemption sound good, but unless government reduces the total taxes to make up for new exemptions, somebody has to pay for them. “Before 2006 and 2007, we did not lower taxes, so when these new exemptions started coming out, general taxes went up for everybody else,” Weisman explained.

Before 2006, the county enjoyed the experience of increasing services, spending money on things like the rehabilitation of the old courthouse at a cost of $25 million, giving generous pay increases to employees and providing a variety of services it had never offered before.

“It was a shock to suddenly have that dry up, and it comes to staff to try and get the commission through those periods of time with the least impact on the public,” he said. “We have actually been very successful at doing that.”

For the past five years, Weisman said, county staff has found ways to get by, sometimes through skill and sometimes fortunate circumstances.

“Through that time, we did sharply reduce the budget without substantially impacting the services we provide, and now we’ve seen them come to the next era, which is stabilization of property values,” he said. “We’re probably going to see some small increases in the coming year, certainly nothing significant, and how the commission adjusts to that remains to be seen.”

The county has a great library system, and its tax haul has remained virtually the same for years at about $41 million annually, he said.

“We have been able to accomplish that because we have not increased staff and we actually reduced staff somewhat,” Weisman said, explaining that employees are the top cost for government. “If you’re going to reduce taxes, you’ve either got to reduce the number of people or the compensation you pay them.”

The library has reduced staff because it has provided automation for people to do their own research, as well as self-checkout. “You can now check the books out yourself by putting them through a scanner,” Weisman said. “When you drop books off, there’s an automatic machine that separates them.”

Also, all county employees including library staff have not received a pay raise in four years, which helps keep the tax rate the same, he said.

Fire-rescue is more complicated, in that it has had a substantial millage increase since 2007 and the payroll costs as a percentage of the total budget are the highest of all county-operated entities. “While there are fuel costs and other things like that, payroll is the biggest thing,” Weisman said. “Our fire-rescue is the best there is. You can be sure that if you require their services, you are going to be treated with the best of equipment with the best people.”

He said the problem with fire-rescue is that the department is in a deficit situation.

“We are spending more than we are taking in,” he said, explaining that a reserve has been built over the years that the department will have to tap into in order to balance the budget, and in 2014 the reserve will disappear unless changes to the revenues or expenses are made or the economy makes a significant recovery.

Weisman said that county staff thought they were going to have a $30 million budget shortfall for 2013, but that did not happen due to several changes, including changes to the Florida Retirement System, which resulted in a $20 million savings. The county also got more revenue than anticipated, and the sheriff came in with a budget increase smaller than anticipated, of $4 million to $7 million.

“We were thinking he might come in with as much as $20 million,” he said, “so that’s how we ended up balancing the budget.”