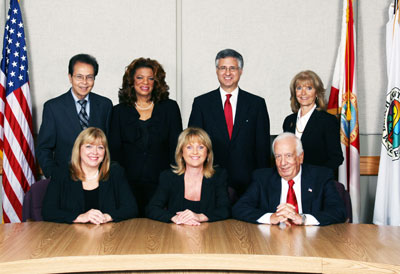 In a 4-3 decision, the Palm Beach County Commission gave preliminary approval Monday to a comprehensive plan amendment that would eliminate a 65,000-square-foot single-tenant cap on the Sluggett property at the intersection of Southern Blvd. and Seminole Pratt Whitney Road.

The vote sent the change to the state’s Department of Economic Opportunity, formerly the Department of Community Affairs, for approval. Once approved by the state, it will return to the county for final approval.

The property had previously been approved for up to 280,000 square feet of low-density commercial property on the 64-acre tract with the 65,000-square-foot cap, but the applicant requested authorization to allow a larger store such as a Home Depot or Walmart on the property.

The site has a commercial low designation for neighborhood uses, and county staff determined that lifting the 65,000-square-foot cap would require an amendment to the comp plan.

The land-use amendment would apply only to the Sluggett property, according to Project Manager Bryce Van Horn, who made the presentation for county staff, which recommended approval.

“Because this is narrowly focused, it will maintain the integrity of the [commercial low] land use as a neighborhood, and will maintain internal consistency in the plan,” Van Horn said.

At its June 8 meeting, the Local Planning Agency recommended denial in a 5-2 vote.

Bob Bentz with Land Design South, representing the Sluggett family, stressed that the property has a current land use allowing 280,000 square feet of commercial space. “That number is not changing, no matter what happens today,” Bentz said. “It really is, what is it going to look like, and what kind of uses can you have on this site?”

Bentz said that if The Acreage were a city, it would be the sixth-largest in the county, and geographically it would be the largest, with a relatively small number of commercial uses.

“It is a very large, sprawling, unplanned neighborhood that was platted many years ago, and today we have to deal with that,” he said. “The issue becomes sustainability within the Acreage area, and serving the people who live within that community.”

Bentz said not providing nearby services negatively affects not only the residents in that community, but people in the surrounding communities where the residents have to drive, such as Wellington and Royal Palm Beach.

Bentz also pointed out that the Sluggett property is unique, unlike any other property in the county.

Former Department of Community Affairs Director Tom Pelham, also representing the Sluggett family, said he supported the staff report and stressed that the change would not set a precedent.

“This site is unique, and that was the reason for the direction to the board to prepare something that would apply only to this particular site, in terms of its location, its size, and in no way would approval of this plan amendment legally bind or tie the hands of any future county commission,” Pelham said.

He also pointed out that the 280,000 square feet represents only 6.5 acres, or 10 percent of the total acreage of the property.

“The Acreage has 55,000 acres,” Pelham said. “To suggest that development, not even within The Acreage, but on two arterial roadways, would in some way harm or adversely affect The Acreage simply would not withstand scrutiny.”

He noted that the Sluggett project is just a fraction the size of the one proposed several years ago for Callery-Judge Grove.

“It is a very limited, reasonable change,” Pelham said. “Without it, the planning situation is going to continue to get worse and worse. This is good planning in every sense of the word. It’s a prime commercial location on two arterial roadways.”

Pelham added that the change would provide for a major anchor tenant on the site to support other shopping possibilities, and that a significant store such as a Home Depot would provide many employment opportunities.

Commissioner Karen Marcus pointed out that county staff had repeatedly recommended denial of a big-box store on the property, and that the Florida Department of Transportation had indicated that it would put Southern Blvd. over capacity.

“I guess I’m struggling with why it was a bad thing all along, and then what’s changed that a big box is an appropriate use here based on all of the things that we had talked about before, because it hasn’t changed, at least not in my opinion,” Marcus said.

Planning Director Lorenzo Aghemo said staff had recommended approval in 2010 because it was based on the concepts of the now-defunct Sector Plan, that it had recommended approval of commercial low with the condition that the single tenant be limited to 65,000 square feet and that it be in the form of a traditional marketplace. He noted that the county commission in March had directed staff to draft an amendment eliminating the 65,000-square-foot single-tenant cap.

Commissioner Steven Abrams asked whether the amendment constitutes poor planning, and Aghemo said because it doesn’t affect commercial low anywhere else in the county, it does not.

Commissioner Jess Santamaria, who lives in Royal Palm Beach about 5 miles east of the site, said residents have told him the reason they moved there was the low density.

“There are some people who want modernization, but the majority of the people I have spoken to over the years came for the same reason I moved into the western communities, the openness, the isolation, being away from West Palm Beach,” he said.

Santamaria said he attended the ALA meeting a few weeks ago and listened to the arguments, and also met with the Sluggett family and their consultants, including Pelham, in the past week.

“I was highly impressed by Mr. Pelham,” he said. “I agreed with everything he said. Everything he said is good planning. There is no doubt in my mind that he means what he says, not because he’s a paid consultant.”

But Santamaria said that although the property is unique, the community is also unique. “The number-one priority is that the majority of the people who bought homes there over the past years and continue to live there, I have heard over and over again: ‘Leave us alone, this is what we want. This is the lifestyle we bought into,’” he said.

There were three phone responses with one opposed, as well as the letter from the ALA in opposition, he said.

Commissioner Burt Aaronson said he has a similar situation in Boca Raton, where residents opposed an approval for a 240,000-square-foot commercial development. Costco came in with 150,000 square feet. “The people objecting to the Costco at that time are now the best customers of the Costco,” Aaronson said, adding that he agrees with the applicants’ comments that residents without services nearby adversely affect other communities.

Commissioner Paulette Burdick said the members of the community that she had talked to asked her not to approve the amendment because it changes the community.

“I respect that,” Burdick said, pointing out that the Costco approval in Boca Raton was in an urban/suburban area. “This is rural, and I believe that the majority of [residents] really want to keep it rural.”

Commission Chair Shelly Vana said she would support the measure because it is on Southern Blvd., does not change the total square footage of the use, and they had not heard from an overwhelming number of people opposing it.

“We see when people don’t want something,” Vana said. “I’m not seeing that.”

Abrams made a motion to approve the amendment, which was seconded by Taylor. It carried 4-3 with Burdick, Santamaria and Marcus opposed.