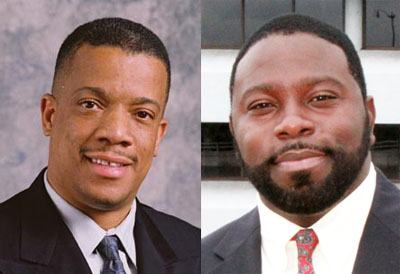 Three-term incumbent Port of Palm Beach Commissioner Wayne Richards (above left) is being challenged by builder Joseph Anderson (above right) in a Democratic primary on Aug. 14.

Created as a special taxing district, the port has authority to levy taxes, but has not done so since the 1970s.

Wayne Richards — Richards, a mechanical engineer and attorney, has sat on the port commission since 2000. He has chaired the commission for the past two years, and is quick to point to the many successes of the port in the past five years, despite a struggling economy.

“The port is extremely important to the local economy here,” Richards told the Town-Crier on Wednesday. “As longstanding chairman of the port, it has been my position that we have a mission to continually attract and bring new businesses to the port.”

Richards views the port as an economic engine for the county.

“We also have a duty to ensure that the product in the Glades has reliable and viable means to be shipped out of Palm Beach County,” he said. “If our port goes down for any reason and they’re trying to harvest and process sugar or molasses in the Glades, they will just shut down.”

As chairman, Richards said he has led the port through a difficult economic period, but yet the port has flourished. “Some say it’s the worst economy in 50 or 60 years,” he said. “The port under my tenure has been very aggressive at going after new business and diversifying our revenue streams, and I want to keep that going.”

More than 60 percent of the passengers are from outside the county. “They are bringing in significant vacation dollars to Palm Beach County,” Richards said. “Every two days, we have 1,200 people on and off that ship. These people have money to spend for their family vacation. They end up getting hotel rooms in South Florida, in Palm Beach County. They end up spending money in the restaurants, the car rentals and the gas stations.”

The port will also soon have the Black Diamond casino catamaran launching next month to replace the Palm Beach Princess, which ceased operation two years ago.

“We aggressively went after a replacement for the Palm Beach Princess,” Richards said. “We believe there is still pent-up demand here in Palm Beach County for local gaming. They will offer twice-a-day sailings out of the Port of Palm Beach.”

Other recent successes of the port include attracting a Brazilian company that will import guarana seed and extract natural caffeine to be sold to pharmaceutical and energy drink manufacturers. The company will hire about 75 employees making an average of $60,000 plus benefits, Richards said. He added that the port also has a new metal exporter that will be exporting scrap metals to the Far East.

The diversification of the Port of Palm Beach is important because a majority of the revenue was formerly generated in exporting food and building materials to the Caribbean, an area hit hard during the economic downturn.

The result was a major hit to the port, he said. “Over the last four years, we have diversified our revenue base, and for five consecutive years, we have notched increased revenues,” Richards said.

Annual revenues have gone from $12.6 million to $16 million over that time, and in four of the five years, the port reduced expenses. “Our margins went from 25 percent to 52.1 percent in five years,” he said. “I’m very proud of what we’ve done with the port.”

Richards said he has taken a leadership role in the inland port project, which aims to create an inland transfer station in the Glades. The idea recently received a 4-1 vote of confidence by the commission.

“As CEO of the port, I am 100 percent supportive of the inland port,” he said. “Our mission as an economic engine is to bring jobs to the county. All the studies show that thousands of individuals in the Glades will be employed.”

Joseph Anderson — Challenger Anderson said that he believes not enough people know about the port and what it does.

Anderson, who lives in Riviera Beach, said he is running to make a difference and bridge the gap from the port to the surrounding communities.

Anderson, who owns a construction company, is a 1988 graduate of Suncoast High School. He later earned a degree in accounting from Bethune Cookman University.

Looking at the port from a global standpoint, Anderson said the upgrading of the Panama Canal and the development of the inland port will play important roles.

“First and foremost, with the Glades’ unemployment and the inland port coming in, you have to have enough of a skill set to vie for some of these jobs, and this is something that we have to put in place as of right now,” he said. “We have to leverage our position with Palm Beach State College to make sure that these young men and women can vie for some of these jobs.”

Anderson said other ports and colleges have entered into partnerships to offer young people the skills to work successfully in port jobs. “They can vie for some of these jobs at these seaports, which is stevedores, longshoremen and crane operators,” he said. “When they graduate, they can have some of these skill sets.”

Anderson said there has been a lack of presence by the port under his opponent’s leadership. “[Richards] had been admonished from the South Bay dais by Commissioner [John] Wilson about his presence, and lack thereof,” Anderson said. “Also, he walked out of the negotiations when they were negotiating the inland port, so there’s some displeasure with his lack of presence and lack of interaction in fighting and advocating for the people in the Glades, as well as in Riviera Beach and other areas.”

Anderson said the commission needs a person who will work for the people and not special interests.

“There’s just a litany of things that go on that I feel this administration has done that haven’t been keen to the desires of the people who reside in the port district,” he said.

Anderson said he realizes that he has a daunting task ahead of him in trying to unseat a three-term incumbent, but he said not too many people know Richards.

The winner of the primary will face Republican George Allen Black and two write-in candidates in November.