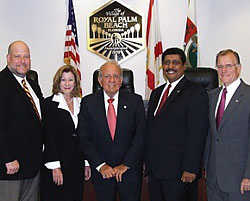 The proposed property tax rate will be unchanged at 1.92 mills to help finance a total $32 million budget, with about $5 million for capital projects freed up from reserves due to accounting principles changed this year.

Village Manager Ray Liggins said the primary intent of the budget is to prepare a financial plan with the same tax rate despite decreases in revenue, yet also deliver improved services with the completion of Royal Palm Beach Commons Park.

“The tax rate is proposed to remain the same at 1.92 mills per thousand dollars of taxable value,” Liggins said.

At that rate, the owner of a home assessed at $150,000 after exemptions would pay $288 in village property taxes next year.

The budget includes a first-time stormwater utility fee of $4 a month per residential unit, primarily to pay for canal maintenance, with a corresponding reduction in public utilities and the general fund, where that money came from previously.

“Due to changes in governmental fund accounting requirements, the village was able to release about $5 million previously held in reserves,” Liggins said. “A five-year plan for the use of those dollars was presented and approved by the council on May 3.”

The budget also proposes to use a little over $400,000 of the freed-up money to balance the budget, Liggins said. Consistent with the five-year plan, the budget proposes to include new software in public works and parks and recreation to reduce costs. The budget also utilizes more contractual services than the year before.

“Overall, this year’s budget is $32 million, or $11 million less than last year’s budget,” Liggins said. “Capital expenditures are down $11.5 million, mainly due to the 160-acre Commons Park being further along and getting completed. It’s up approximately $450,000 in operating expenses, inclusive of the stormwater utility.”

The debt service was reduced $275,000 due to refinancing of the Commons Park debt at a lower interest rate, he said, adding that staff will continue to work to further improve revenue through new business development.

“I’m pleased to say that this year, as compared to the last three years, we have positive things to say instead of negative things,” Finance Director Stan Hochman said. “We’ve experienced the smallest decrease in property values in the last four years. Tax-related revenues, which were stable or reduced in prior years, are now increasing. There is a major increase in building-related revenues as well.”

Hochman also updated the prior total property value, which had been estimated at $1.839 billion, to the most recent value of $1.807 billion released by the Palm Beach County Property Appraiser’s Office, which is a difference of $31 million in total property value. “Regardless, we’re still maintaining the 1.92 mills per thousand,” Hochman said.

He added that 62 percent of the budget is in general operating expenses. General capital is 16 percent, reserves are 15 percent, debt service is 5 percent, and the new stormwater utility fund is 2 percent.

The budget includes a 2 percent proposed employee merit increase for a total cost of about $110,000, with no cost-of-living allowance.

Staff adjustments include the deletion of one maintenance worker in public works and the transfer of the equivalent of 6.25 positions to the stormwater utility. In parks and recreation, a program supervisor was added and one irrigation technician was deleted.

Revenue for the new stormwater utility created in April will be solely from the $4 per residential unit, to be used for the collection of stormwater runoff, transmission, treatment and disposal, Hochman said. The revenue of $665,000 will be used solely for the stormwater utility.

Former Councilman Dave Swift asked whether the village went into reserves this year as it did last year, and Hochman said the village was committed to have 25 percent of its annual budget set aside as a reserve, which it has done through the years. “We had roughly $5 million set aside,” he said.

However, a recent Governmental Accounting Standards Board ruling found that the $70 million the village has from the utility sale to the county can no longer be segregated from the general fund.