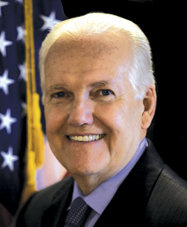 Wellington resident Joe Talley hopes that his extensive law-enforcement background coupled with an interest in creating more community involvement in law enforcement will drive voters to the polls to vote for him in his bid to become the next sheriff of Palm Beach County.

Talley faces incumbent Sheriff Ric Bradshaw and fellow challenger Cleamond Lee Walker in the Aug. 14 primary election. A write-in candidate, Kevin Coleman, is also seeking the position. If one candidate gets more than 50 percent of the vote, he will win outright. If not, the top two candidates will advance to the November general election ballot.

Talley, 68, was born and raised in Maryland to a pastor father and a schoolteacher mother. He said it was always his dream to become a police officer.

“I always had my face glued to the window when a police officer was driving or walking by,” Talley recalled. “Later, when I understood what folks in law enforcement do, it drove my desire even stronger.”

At age 21, Talley joined the Baltimore County Police Department. “I didn’t want to waste another moment,” he said. “I enrolled at the youngest age possible.”

He served 22 years with the department, rising to the rank of major in his final six years. In that time, he also graduated from the FBI National Academy and the Federal Executive Institute, both in Virginia. He also became skilled in numerous other specialized training opportunities.

After he retired, Talley worked in the private security business for an international oil and gas company in Holland. In 1989, he returned to Philadelphia for similar work.

“I began to establish a crime prevention program,” he said. “At that time, they were averaging a holdup a week.”

It was there that he developed an interest in the equestrian industry and took a job managing a farm.

In 1998, he moved to Wellington, where he currently manages Windsome Farms. He also spent five years, from 2000 to 2005, in the Palm Beach County Sheriff’s Office’s reserve unit.

Talley said that he is proud of his long and successful career in law enforcement. “It has been simply splendid,” he said. “I had the opportunity to be successful in learning about the business.”

Though he’s been out of it for several years, Talley said he keeps abreast of new developments. “I’ve stayed current through all my alumni associations,” he said.

Talley said that if elected, he would be a good leader who promotes people based on merit.

“The current style of leadership in the office, or lack thereof, is a disappointment,” he said. “Hiring is done for friends of friends. Promotions are given to friends. I am disappointed because folks cannot get through their career and leave feeling they had a level playing field.”

Talley said that minority communities do not trust the PBSO.

“When you go to those communities, you never get a good report,” he said. “You are supposed to be a liaison to the community, and then you turn your back on them. The community feels like if they are Hispanic, they just find someone who speaks Spanish and tells them to take care of the issues.”

Talley added that areas out west such as Belle Glade are in need of an advocate.

“Belle Glade is synonymous with punishment,” Talley said. “Deputies who screw up are sent there. Those are people who don’t want to be there.”

This poses a problem for the office as a whole, he said, because it creates distrust in the community. “We need people to talk to deputies,” he said. “Where is the accountability?”

The PBSO budget often has been an item of concern for county officials. Talley said he believes there is too much inflation in upper-level personnel.

“With a half-billion-dollar budget, you would think that this would be the smoothest-operating, best-equipped agency,” he said. “The sheriff is inflating in terms of personnel, and giving out perks to buy loyalty. That’s money that we need to see being spent.”

Talley said he would call for a line-item “layman’s budget.”

“The public should have a clear understanding of that money,” he said.

Regarding oversight by the Palm Beach County Office of the Inspector General, Talley said he would gladly provide access.

“I can’t understand why [Bradshaw] would not invite oversight,” he said. “People have asked for it, but he’s saying no. I said that I would give her an office in the building. I don’t have anything to hide.”

If elected, Talley said he would move resources to the service delivery level to help deputies help people.

“We need to improve response time and case clearance,” he said. “We’re only going to do that by focusing training and resources to response on the street level.”

He also said that he would seek national accreditation for the office. “This agency has Florida accreditation,” he said. “But the Commission on Accreditation for Law Enforcement Agencies is the gold standard. This organization could not be accredited with its unfair hiring and unfair promotions.”

One major issue he’d like to address is human trafficking, which he said is a problem in South Florida.

“People bring youthful persons from families and adults here to the country illegally, with the promises of an American life, but they become prisoners or bonded,” Talley explained. “They become either sex slaves or they’re forced to work in service jobs, but as prisoners.”

Talley said he would like to address other issues such as homicide and gang violence, which he thinks Bradshaw has not adequately addressed.

“He’s saying that the homicides are because of gangs,” Talley said. “If he moves resources into those areas, then I’ll be convinced he’s serious about gangs and homicides.”

He also criticized Bradshaw’s response to recent shootings by PBSO deputies. In the case of Loxahatchee Groves resident Seth Adams, Talley said he thought that Bradshaw quickly exonerated the deputy without all of the information.

“Within hours, he’d adjudicated the case, before an investigation,” Talley said. “That creates a chasm between the agency and the public. Why not say that you’re sorry the incident occurred, that you’re going to investigate it and that you don’t have a response? A family here lost their son.”

Ultimately, Talley said he would be a leader who gives everyone a fair shake.

“I’m sincere about this job,” he said. “I’m sincere about this community. This sheriff has been here eight years and has successfully created a huge barrier between the public he’s supposed to be serving and the agency he abused. It’s time for those two entities to come together to reduce the problems that exist in this county.”