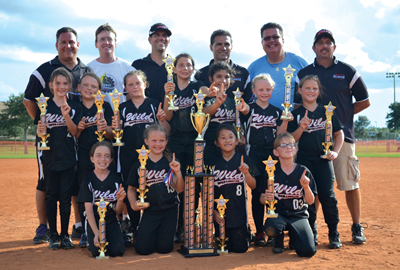 The Wellington Wild 8 & Under “B” Division travel softball team won the state championship on July 8. They are also currently ranked No. 1 in the 8 & Under “B” division team in the country.

The Wellington Wild 8 & Under team was formed by Manager Ron Mobilia in March and has competed in tournaments every weekend since May. The team’s season culminated on July 8 with victory in the USSSA Florida State Tournament, which was held at Seminole Palms Park in Royal Palm Beach.

This season, the Wellington Wild team had two additional tournaments wins and was runner-up in two tournaments. In the state tournament, the Wild team defeated all of their opponents by a margin of at least six runs until the final game.

In the championship game against the Blue Angels from Boynton Beach, the Wild managed a come-from-behind victory in the final inning. The Wild was losing 14-12 going into their final at bat. Amanda Golson hit a lead-off single in the final inning. Rylee Jordan then hit her first home run of the season to tie the game. Next, Grace Groover got on base and was brought home by an Abbie Hynes hit to secure the win and championship.