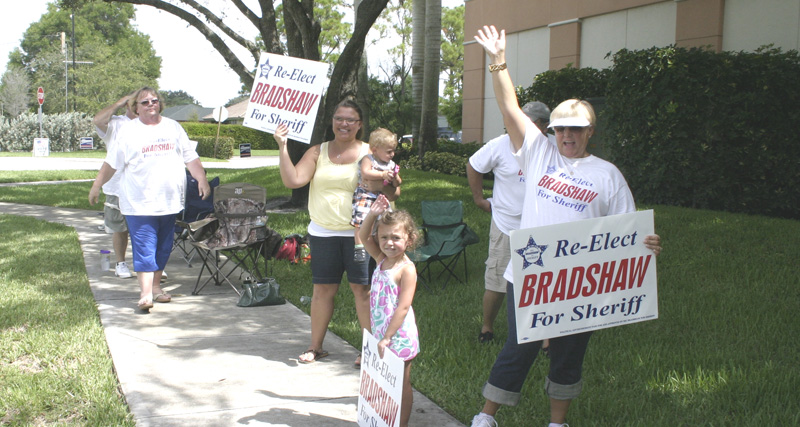 Tuesday was a great day to be an incumbent constitutional officer in Palm Beach County. Five countywide officials were up for re-election, and all five appear to have won easy re-election, according to nearly complete unofficial results.

In the race for Palm Beach County Sheriff, incumbent Ric Bradshaw was ahead with 79 percent of the vote, well outpacing challengers Joe Talley and Cleamond Lee Walker, with nearly all precincts reporting. With well more than the necessary 50 percent of the vote, Bradshaw appears set to claim a third term.

While operating today’s election, Supervisor of Elections Susan Bucher was also on the ballot seeking a second term in office. Despite a few high-profile glitches over the past four years, Bucher appears to be the first elections supervisor to win re-election in Palm Beach County since the disputed 2000 presidential election. With 68 percent of the vote, Bucher looks to have survived challenges from Delray Beach Mayor Woodie McDuffie (who had 30 percent of the vote) and former elections workers Caneste Succe (who had 4 percent of the vote), with nearly all precincts reporting.

County Clerk & Comptroller Sharon Bock, seeking a third term, appears to have easily survived a challenge from mortgage fraud activist Lisa Epstein. With nearly all precincts reporting, Bock had 76 percent of the vote to 24 percent for Epstein.

In the Democratic Primary for Palm Beach County Tax Collector, Anne Gannon appears to have easily defeated former Tax Collector Peter Carney. Gannon had 87 percent of the vote to Carney’s 13 percent with nearly all precincts reporting. Gannon is expected to formally claim a new term in November, when she faces only a write-in opponent in the general election.

Above: Supporters of Sheriff Ric Bradshaw campaign Tuesday in Wellington.