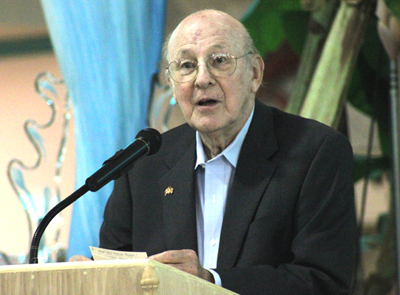 The crowd packed the courtyard in the original Wellington Mall for the “Tell the Truth” gathering.

Adams told the crowd that Wellington’s charter had been made with several unique provisions to protect the community.

“The infrastructure for land development was to be paid for by the developer, not the taxpayer,” he said. “We also would preserve and protect the distinctive characteristics of the community.”

Adams said the charter also requires a super-majority vote by the council to increase density in an area.

These promises, he said, encouraged residents and government officials to get behind incorporating Wellington.

Regarding the Wellington Equestrian Preserve, Adams said that Wellington has been going through without a plan.

“Originally, there was a crossover design at the intersection of South Shore and Pierson,” he said. “Thirteen years later, we are just beginning to think about doing that. Our policy over these years has been to have no plan. Is it any surprise when an ambitious developer pushes for maximum possible density?”

Adams said that contrary to claims that property values will plummet with low-density housing, they skyrocketed.

“Property values went up over a quarter-billion dollars because the horse shows are there,” he said. “The people who bought are our customers.”

Fransetta said he thought that Wellington had come to this point because of a developer exploiting the relationships he had with elected officials.

“A developer who has a relationship with the previous elected people in Wellington was using that relationship, and it wasn’t in the best interests of people like myself and most of you,” he said.

“I don’t think I talked to anyone who was against the equestrians having the stadium and doing events over there, and I heard time after time that the new council has said that,” he said. “What I see coming at us is a political move to try to diminish the reputation of those [on the] council now who are simply trying to do the right thing.”

Fransetta also said he had heard Wellington would not have been able to support the World Equestrian Games, yet not getting the games was blamed on council members. “Why are they being blamed for a horse show that wouldn’t have happened anyway?” he asked.

Santamaria said that many residents moved to the area because of its open space, equestrian activities and quality of life.

“We elect people to represent us to maintain our quality of life, but slowly but surely, the things we have come here for have been stolen from us by the people we elect. It’s a real shame,” he said.

Santmaria said he strongly supported councilmen John Greene and Matt Willhite and Mayor Bob Margolis because they guaranteed that they would uphold ethics in government and the Office of the Inspector General.

“They agreed to follow the mandate of the 72 percent in the last election to support the inspector general and the ethics commission,” he said. “The majority of people want ethics in government — they demand it.”

Wellington Village Manager Paul Schofield was on hand to answer questions from the audience regarding the decision by the council on the dressage facility.

Richard Jackson asked whether council members had discussed conditions suggested by Lou Jacobs. “The council discussed it at some length,” Schofield said.

Bart Novak expressed concern that the equestrian issues were being fought primarily between two individuals. “Why don’t the people have a say in this?” he asked.

Novak also criticized the council’s policy of not responding to questions posed during the public comment portion of the meeting. “Why don’t we get some answers?” he asked.

Schofield said that staff tries to meet with residents to address their concerns.

Discussion on these issues and more are expected to continue as part of Santamaria’s monthly public forum meetings.