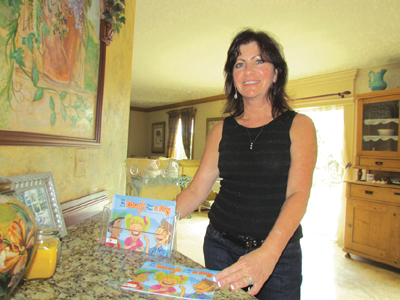 After years of working and raising her son and stepchildren, children’s author Kimberling Galeti Kennedy never forgot her passion for writing.

Today she is the author of two books — her first, Why You Should Laugh Three Times a Day, and her recently completed second book, Hey, Don’t Forget the Sunscreen.

Growing up in Cleveland, in a big family with 10 brothers and sisters, Kennedy found creative ways to keep herself busy. She would paint and write little stories to entertain her siblings. At the time it was just something fun to do.

Now an empty-nester, Kennedy lives in The Acreage with her husband, Joseph. After her son Joe left for college, Kennedy had more free time on her hands, and decided to fully focus on her passion for writing.

“It’s just never too late to follow your passion,” Kennedy said. “Don’t let your inner child go away. Keep it alive, and it will keep you happy.”

Kennedy’s Why You Should Laugh Three Times a Day is a fun book for children and even adults. “It’s one of those books that parents and grandparents will enjoy reading to their children,” she said. “It’s just a fun book with little stories about different life situations that anyone can relate to.”

Kennedy’s second book, Hey, Don’t Forget the Sunscreen, has been submitted to her publisher, Tate Publishing. The book educates children on the importance of sun protection. She came up with the idea after she and her husband underwent treatment for the two most common kinds of skin cancer, basal cell and squamous cell carcinoma. “We had a little sun damage to our skin, and my husband and I had hundreds of stitches after taking out the cancer,” Kennedy said.

Some of her inspiration for the book came from working as a cake baker in the bakery department at the Publix in the Shoppes at Andros Isle. When she had her bandages from stitches on at work, she would hear all kinds of skin cancer stories from customers. “I’ve heard so many horror stories from people,” she said. “Before that, I didn’t know our form of skin cancer was so common.”

The book would be her opportunity to inform others of the dangers of unprotected skin. “I wanted to get the word out to children at a young age,” she said. “I thought about all the young mothers who would read this to their children and might still be using the tanning beds like I used to.”

Kennedy’s hope is to raise awareness about the harmful effects of the sun and tanning. “Maybe now the children might say, ‘Hey, Mom, let’s go back and put some sunscreen on me today,’” she said.

The second book has a more serious tone than her first book, but it’s an important issue that Kennedy felt she had to address. “I even got a couple of doctors to endorse it, and they thought it was a great idea,” she said.

Kennedy worked on her books for many years and never gave up the determination to have them published. “I made it happen, and that’s the example I want to set for children, to never give up on their dreams,” she said.

Living out in The Acreage provides Kennedy with many story ideas. “Just looking outside my window, I see things every day,” she said, “things like the little birds that fall on the ground. I even have a story about them now.”

Kennedy is available for class readings, events and book fairs. “I have been out to a few schools,” she said. “I really would like to do more, as long as they’ll have me.”

Why You Should Laugh Three Times a Day is now on sale and available in bookstores or on the Internet. Hey, Don’t Forget the Sunscreen will be available in January.

For more info., visit www.kimberlinggaletikennedy.com or e-mail kimberling358@aol.com.
(Above) Author Kimberling Galeti Kennedy at her home in The Acreage.