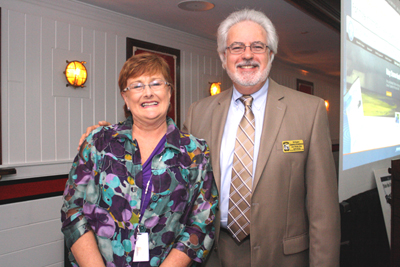 Members of the Wellington Chamber of Commerce learned more about Tropical Storm Isaac, which flooded the community last month, during a luncheon Wednesday.

South Florida Water Management District Intergovernmental Representative Pam Mac’Kie explained not only the effects of the storm, but also how water is handled in Wellington and throughout the area.

“You’ll hear people say that this is a one-in-100-year storm,” she said. “That really means that there is a 1 percent chance in any year that this kind of storm will happen. It’s an unusual event, but don’t think that we’ve had our share for the next 99 years. There’s always a 1 percent chance that it could happen.”

Mac’Kie said that the area saw about 18 to 20 inches of rain, and noted that from Friday, Aug. 24 through Sunday, Sept. 5, the SFWMD pumped 88.1 billion gallons of water out of Palm Beach County.

She explained that water drains through three systems, all controlled by different bodies.

“The primary system is the canals we control,” she said. “The secondary systems are controlled by your government, and the tertiary systems are those ponds or lakes in your neighborhoods.”

During the storm, the SFWMD used the C-51 Canal to send water east and west, and also used the Palm Beach Aggregates water reservoir, Lake Okeechobee and the water conservation area to store excess water.

Still, she noted, some areas saw flooding. “Flooding is what to expect in a storm under these circumstances,” Mac’Kie said. “That’s the system that we have.”

Mac’Kie said that local governments worked closely with the SFWMD to help solve the crises. She pointed to Royal Palm Beach, which offered to store water for Indian Trail.

“Indian Trail was supposed to be discharging into the L-8 Canal, but it was full,” she said. “Royal Palm said, ‘Put some of your water in our canals. We’ll hold it there until it can get out.’ So that is an example of the real, on-the-ground coordination that happens during these events.”

The district also put in emergency pumps throughout the area to help move water more quickly.

“These are not pumps you put in the back of a truck and plug in,” she said. “Our guys were out there 24 hours a day building, constructing, connecting pipes and installing these pipes so water could move through the canals and off the properties.”

Mac’Kie noted that each tier — from neighborhood waterways to the major canals — is integral in moving water.

“It’s like a highway system,” she said. “You’re on I-95 and you don’t understand why you’re having to stop, but you can’t go because all the traffic is backed up. And it’s backed up because somewhere on an off-ramp there’s an accident, something has clogged up the arteries. Backup on a small road causes backup on the larger roads and then on the interstate.”

Mac’Kie said that residents have a responsibility to make sure that the drains, culverts, swales and other water discharge areas on their property are cleared.

“If branches break off into the larger canals, think about what a dam that would create,” she said. “There are more simple things, like brush along the grates, which blocks 20 percent of water from getting in. That blocks traffic.”

Mac’Kie said that although grass is good for treating water, too much foliage could cause water to slow. “These areas have to be regularly mowed,” she said.

Mac’Kie said that residents have a part to play. “This is a shared responsibility,” she said. “We need to get our community associations, our cities and our special districts together. Each of us has a role to play. Your culvert under your driveway, your swale, that’s your responsibility.”