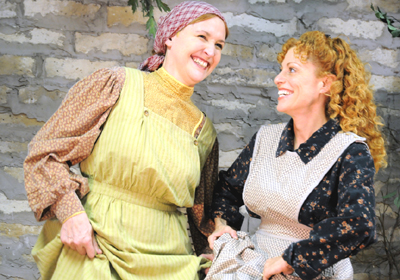 Palm Beach Dramaworks’ 13th season launches on Oct. 12 with Lanford Wilson’s Pulitzer Prize–winning play Talley’s Folly, which runs through Nov. 11. Erin Joy Schmidt and Brian Wallace are featured as Sally Talley and Matt Friedman, the unlikely sweethearts who find themselves drawn together in an intense romance.

This Pulitzer Prize–winning play tells the story of a well-to-do Connecticut family whose life is upended when friends, seized by a nameless terror, come to live with them. A Delicate Balance runs Dec. 7 through Jan. 6.

The season continues with Lorraine Hansberry’s classic drama A Raisin in the Sun, starring Ethan Henry. In this powerful play, a substantial insurance payment could have life-changing consequences for a poor black family living on Chicago’s South Side in the 1950s. A Raisin in the Sun runs Feb. 1 through March 3.

The curtain rises next on the comic romp Exit the King, featuring Colin McPhillamy as the incompetent king. In Eugene Ionesco’s absurdist work, a dying king has left his country in near ruin. Despite the efforts of the queen and others to convince him he has only 90 minutes left to live, he refuses to relinquish any control. Exit the King runs March 29 through April 28.

The season concludes with Brian Friel’s Dancing at Lughnasa, with Julie Rowe and Margery Lowe playing two of the five Mundy sisters who make the most of their simple existence in rural Ireland. This Tony Award–winning memory play is told decades later from the perspective of the youngest daughter’s son. Dancing at Lughnasa runs May 24 through June 23.

All plays and dates are subject to change.

Above: Julie Rowe and Margery Lowe in a scene from Dancing at Lughnasa.