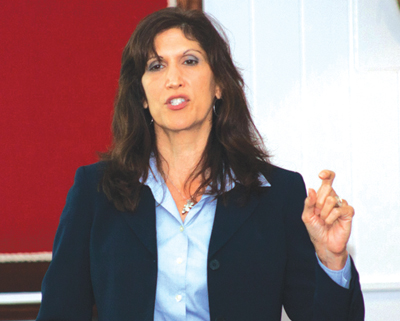 Palm Beach County Inspector General Sheryl Steckler met with members of the Wellington Chamber of Commerce at a luncheon Wednesday, Aug. 29 to discuss her office.

Steckler said that the goal of her office is to make sure governments are kept accountable, not only by state and county laws, but by their own charters and policies.

“We have to know every law, every code, every policy that government has,” she said. “It’s really about how government runs. Are we efficient? Are we effective? Are we getting what we’re supposed to be getting?”

This process also affects the business community, which often bids on government contracts. The inspector general’s office has jurisdiction over contractors and subcontractors, she noted.

“We have to ask if the business community is getting a fair opportunity,” she said.

Steckler stressed that her office is not controlled by any governmental body.

“The key to this office is its independence,” she said. “That was very important to the people who were part of the process. This office reports to the people. It does not report to the county commission.”

She noted, however, that there is an oversight committee, which includes the state attorney and public defender and members of the Palm Beach County Ethics Commission.

“They hire the IG, and they can remove the IG,” Steckler said. “It was intentionally done that way. What we write, a lot of governments don’t want to hear. I have to hold governments accountable to make sure that you, as taxpayers, get your dollars worth out of your government.”

Steckler said that her office has access to government files and can audit, investigate and look at contracts. When dealing with businesses working with government, Steckler said her office is very careful. “We have unrestricted access when dealing with a company,” she said. “We understand public records. We also understand nondisclosures. We’re very careful to protect the information we get, and we redact out information from the public when it’s not public information.”

More than investigating and uncovering wrongdoing, Steckler said her office is about prevention and education.

“It’s about stopping that behavior,” she said. “It’s about better efficiencies, better controls and better oversight. A lot of what we do is really built on prevention, which is hard to measure.”

She noted that every decision, investigation, audit and more are available on her web site at www.pbcgov.com/oig.

“Each year, I also issue an annual report, because you need to hold me accountable,” Steckler said. “You need to know what is being done with your money.”

Also available are educational tools, such as presentations. “We want to educate you, as a citizen, as to what is happening in your government,” she said.

For citizens looking to help the office and get involved in local government, Steckler said that training is available.

Steckler said this is a way for citizens to learn about and be active in their own government. “We have a lot of citizens who are really engaged in this,” she said.

Ultimately, Steckler said that her office aims to help governments monitor and change their behavior so as to be accountable to their constituents.

“People need to actively enroll,” she said. “It really needs to be a behavior change. Just because you can [do something] doesn’t mean you should. That is really what I am trying to implore on the government officials.”

Steckler stressed that governments and their officials should serve the people and work in the best interests of their communities.

“Can you look yourself in the mirror at the end of the day and say you did an honest and good deed with taxpayer dollars?” she asked.

For more information about the Office of the Inspector General, visit www.pbcgov.com/oig.