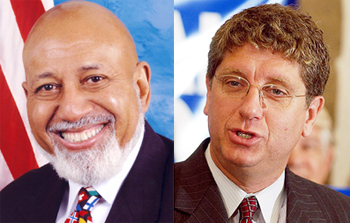 The district, which spans from downtown Fort Lauderdale into the Glades, includes much of Royal Palm Beach and Loxahatchee Groves.

Like Hastings’ previous district, the newly drawn district leans strongly Democratic — so much so that the Republican Party is not even fielding a candidate.

However, that doesn’t mean Hastings will be without opposition. Nationally known anti-abortion activist Randall Terry, a resident of West Virginia, is on the ballot without a party affiliation. Terry is also running for president, on the ballot in several states, but not Florida.

Terry is using the campaign to focus on his anti-abortion message, and also to set up conditions he believes will help defeat President Barack Obama.

“Randall Terry’s big way of going about things is to raise money for his national efforts, which are largely centered on anti-abortion efforts,” Hastings told the Town-Crier on Wednesday. “Interestingly, he’s running for president in three other states.”

Hastings said Terry’s candidacy points out a big loophole in Florida law that allows a person from out of state to run for office, adding that “the legislature needs to clear it up.” Hastings said that initially he thought about challenging Terry’s candidacy but decided such an effort would only give him more publicity.

Hastings said he is proud to be representing Royal Palm Beach and Loxahatchee Groves in the newly drawn 20th Congressional District. “In a previous redistricting, I was given a portion of Wellington, so I’m not a stranger to the territory,” Hastings said. “Plus, I’m a small-town guy. I was born and raised in Altamonte Springs, which is 10 miles north of Orlando. Even in my representation of the overall geography, I tend to be as concerned about Pahokee as I am about Palm Beach, if not more so for the reason that small towns don’t have the economic engines that large towns do.”

Hastings said he plans to demonstrate to his new central Palm Beach County constituents that he deserves their trust and that their issues are his issues. “I had the good fortune of meeting [Royal Palm Beach] Councilwoman [Martha] Webster, and we had a long talk,” he said. “I plan to meet with the full council, their time permitting.”

Hastings said he and Webster talked about the Aldi grocery store chain putting its new regional distribution facility in Royal Palm Beach, as well as other land the village is interested in developing. “I like their approach, and it’s an environmentally sensitive area; certainly Loxahatchee is,” he said. “I’ve had a demonstrated record in reference to Loxahatchee working with [former congressmen] Mark Foley, Robert Wexler and Tim Mahoney. We share lots of things, ranging all the way up from the Indian River Lagoon back out into Okeechobee.”

Everglades issues are paramount in Florida, Hastings said, and bring together Florida’s representatives. “Whether it’s in Palm Beach County or St. Lucie or Martin or Hendry or Belle Glade, the fact of the matter is the Everglades are the kind of common concern that is bipartisan,” Hastings said. “It is perhaps the most bipartisan issue that brings the Florida congressional delegation together.”

Hastings said he is also concerned about the economy and seniors’ issues. “I’m 76 years old, so when I talk about Social Security and Medicare, I genuinely mean it, because as I speak with you, I’ve had one of my worst days with arthritis this morning, and I know what people are confronted with,” he said.

Hastings said he has also been a leader in reducing home foreclosures by supporting principal reduction programs that would set the amount people owe on their home to a level more in alignment with the current market.

“I try to get people to understand that it is not only the interest on people’s homes that is causing problems,” he said. “When you have allowed for a group of people to bundle mortgages and do all sorts of debt swaps, and allow those people to make substantial amounts of money, and then cause this crisis, then I think that it should be part of [the government’s job to] allow principal reduction for people who have been responsible with their mortgages.”

In the next two years, Hastings said he looks to a couple of opportunities if elected. One is that if Democrats take back the House of Representatives — which he said is possible, depending on the coattail effect of the presidential election — he would be in a significant position on the House Rules Committee.

More information about Hastings is available at www.alceeforcongress.com.

Terry founded the anti-abortion group Operation Rescue in 1986. He said his strategy in the race is to reach 10 million voters with what he calls “the truth about Obama and Hastings.”

“That they are the proponents of black genocide, child killing and they are attacking the freedom of the church of Christ,” Terry told the Town-Crier on Tuesday.

He said he is concerned about issues other than abortion. “I think that a vote for President Obama helps Muslims to murder Christians and Jews,” he said. “For example, he just recently gave $1.5 billion to the Muslim Brotherhood.”

In that remark, Terry was referring to money that went to the Egyptian government, where the Muslim Brotherhood holds a plurality of parliamentary seats. “The Muslim Brotherhood is the fountainhead of all Islamic terrorism,” Terry said. “His oil policy ensures that we will fund Muslim terrorists at our gas pumps. A portion of every dollar we give for gas goes to Islamic terrorists.”

Terry said he believes Hastings is one of the most corrupt members of Congress. “It’s time for him to enjoy the retirement he so richly deserves,” he said. “He’s a socialist. He believes in class warfare and the redistribution of wealth.”

Terry said he is also concerned about the national debt, especially debt to China. “We’re spending money we don’t have,” he said. “We’re deflating the dollar, which causes inflation of goods and services. Our education system is a mess because it’s run by bureaucrats who want to crank out politically correct children who know how to use a condom but don’t know how to read the label.”

Terry said he plans to spend about $100,000 on campaign advertising in Florida. Terry grew up in upstate New York. “West Virginia is our adopted home, unless I’m elected in Florida,” he said. “I lived in St. Augustine for five years, and I love Florida.”

When not campaigning, Terry writes books, gives speeches and does a daily TV show called the Voice of Resistance. More about his campaign can be found at www.terryforpresident.com.