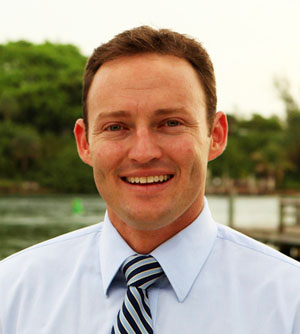 The district encompasses Martin and St. Lucie counties on the Treasure Coast, as well as the northern third of Palm Beach County, including most of The Acreage and northern areas in Royal Palm Beach. The district leans Republican but is considered one of the few swing districts in the state.

Murphy, who was originally challenging West for his current District 22 seat, followed West north when the incumbent abandoned his re-election bid in District 22 for the more Republican-friendly District 18.

Murphy, 29, was born in the Florida Keys and grew up working in his family’s Coastal Construction Group, starting as a day laborer and moving up to assistant project engineer and manager. “I followed the work throughout Florida, wherever it was at the time,” Murphy said. “I lived in mainly Islamorada and Key Largo growing up.”

He earned a degree in finance and accounting from the University of Miami. “I got my CPA license and went to work for Deloitte & Touche,” Murphy said. “My job as an auditor was to go to numerous Fortune 500 companies, look for inefficiencies, waste and fraud — and we definitely need some auditors in our government right now.”

Murphy returned to the family business when the construction industry was in the doldrums. “I wanted to diversify the company, and I looked at numerous opportunities,” he said. “One of those was the BP oil spill [that] had just happened.”

There was concern that the oil would come down the west coast through the Keys and up through the Gulf Stream. “I fished and dived every weekend, as often as I could growing up, and no one was talking about what they were going to do in the Keys to protect our back yard,” Murphy said.

A friend of a friend had invented an oil skimmer, and Murphy ended up building a small fleet of oil skimmers to take to New Orleans and do cleanup. “I did that for about six months and really started paying attention more and more to government’s involvement in our business lives,” Murphy said. “I was frustrated with… the regulations and the permitting process.”

Murphy discovered outdated regulations that had not been updated in more than 30 years and that there was no plan for a disaster of that magnitude. “I started taking a look at Congress and realized that 80 percent of Congress has never worked in the private sector, not a single day; 80 percent are career politicians,” he said. “Then the Tea Party came around.”

Although he initially agreed with the Tea Party’s goal of fiscal responsibility, he was put off by the accompanying right-wing social agenda and divisive tone. “My opponent was the epitome of this divisiveness, calling people Communist and Marxist,” Murphy said. “Every week there was something new. I decided not to sit back and complain — I decided to get involved.”

Murphy announced his challenge to West in March 2011, and the race will likely be one of the most expensive congressional campaigns this election cycle.

He said the outcome will probably be determined by voter turnout. “It being a presidential year certainly helps,” Murphy said. “The last four election cycles in this newly drawn district have been decided by anywhere between 3,000 to 8,000 votes, so this small group of people are deciding the election, and what is so different about our campaign versus West is our ability to reach across the aisle.”

Murphy noted that many of his campaign volunteers are Republicans unhappy with West’s divisive style.

“Not only are we getting financial support from Republicans, people are coming out of their way to come to my office to stuff envelopes and make phone calls to make sure Allen West isn’t elected,” he said.

Murphy said he is the better qualified candidate because one of the biggest problems in the country now is the economy and jobs. “I’m the only candidate in this race with any sort of experience in the private sector creating jobs,” he said. “I’m also a certified public accountant, which I think is especially important now. There’s only eight in Congress.”

He said many of the nation’s major companies are sitting on $2.5 trillion in cash because they have no confidence in what’s going to happen. “When you have such a dysfunctional Congress that’s not getting along, there’s no foresight,” Murphy said.

Murphy’s top goals if elected include finding common ground, beginning with bipartisan legislation, passing a jobs bill and protecting Social Security and Medicare. “These are fundamental pillars in our society, and they must be protected,” he said.

To help Palm Beach County, he said he would further expand the research coast. “We have Scripps, we have Max Planck, we have numerous institutions that are here and some that are considering coming here bringing high-paying, quality, long-term jobs,” Murphy said. “We need to continue to bring those sorts of companies to the area.”

There is room for compromise in Congress, Murphy said, but the Tea Party has prevented it. “I’ve met with several Republican members of Congress who are not happy with the Tea Party,” he said. “They don’t like the divisiveness and are definitely willing to find compromise on major issues.”

Murphy, for instance, noted that deliberations between House Speaker John Boehner and President Barack Obama made significant progress toward solutions until Tea Party congressmen shut it all down. “Now we’re left with this fiscal cliff looming because they couldn’t come to a deal,” he said.

On the scale of liberal to conservative, Murphy considers himself a moderate. “I tell people all the time I used to be a Republican,” he said, explaining that he switched parties in 2011. “I didn’t get into this because I’m gung-ho one side or the other. I want to get things done.”

On immigration reform, he does not support amnesty and believes borders should be strengthened. “I would support comprehensive immigration reform,” he said. “I feel that especially young adults brought to this country by no fault of their own deserve a path to citizenship.”

His view on the Affordable Healthcare Act is that it is not perfect but is a good step toward major changes needed in healthcare. “The rising cost of healthcare is almost exponential,” Murphy said. “We need major changes. Making it a more fair process was a definite step forward.”

Murphy believes some business regulations are needed, especially on banks, which he feels are out of control. “Trillions and trillions of dollars a year have been traded without any regulation,” he said. “It wasn’t too much regulation that got us into this mess. The predatory lending and everything else that happened leading up to this was a problem and something that needed to be addressed.”

Murphy favors a return to what he calls “boring banking.”

“There’s no incentive for banks to give you or me a loan for a car or a house or a little business that we want to start because they can go trade it in the market and make 15 or 20 percent, and if they lose it, well, hey — what’s to lose? Someone will back us up,” he said.

Murphy differentiates himself from his opponent by noting that he’s a business owner, a CPA and a job creator.

“I think we need people with financial backgrounds in Congress,” he said. “What’s the definition of insanity? Doing the same thing and expecting different results. I think we need new blood, we need different ideas, and we need fresh thinking. The same old thing isn’t working.”