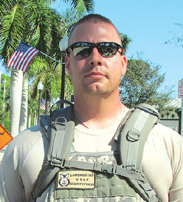 Dressed in his military fatigues, armed with a bad leg and more than 80 pounds of equipment, Sgt. Darrell Langworthy walks the perimeter of Royal Palm Beach and Southern boulevards at least five times a week, 5 miles to 8 miles in a stretch.

Langworthy, founder of Warriors4Warriors, does this in honor of veterans who have served the nation but have had a difficult time readjusting to civilian life due to post-traumatic stress disorder (PTSD) or other conditions.

As he passes Our Lady Queen of Peace Cemetery, Langworthy stops and drops to one knee. “I think of how many soldiers are in there from all the different wars,” he said. “Then I think of this war, and how many have taken their own lives because of PTSD.”

After serving their country together in Saudi Arabia, Langworthy and Air Force veteran Joseph Galone Jr. experienced firsthand the difficulties many face after being deployed.

“When we got back, Joe had some issues topped with coming home, finding a job, going to school and feeding his family,” Langworthy recalled. “With a lot weighing on his mind, he got into a really bad place and was close to hurting himself. So we got him the help he needed from the VA.”

Six months later, when Galone had left the military, his PTSD issues continued, but the help he needed was not available. Galone knew he needed more counseling but was turned away. “They kept telling him, ‘Oh, we can’t fit you in right now because we’re overloaded,’” Langworthy said.

Galone, who lives in Buffalo, N.Y., would tell Langworthy, a Royal Palm Beach resident, about all the problems he was going through and his difficulty getting treatment from the VA.

“I asked him one day if there was a way for me to get him counseling for PTSD and depression and if that would help him while waiting for the VA to get things straightened out, and he said, ‘Yeah, absolutely, that would be great,’” Langworthy recalled.

That was the beginning of Warriors4Warriors, a charitable trust that assists veterans and their families in making the transition into civilian life easier.

“We realized by trying to figure out his problem that these are problems that many veterans need help with,” Langworthy said. “We thought if we could raise money to provide these counseling services, it would help veterans a lot.”

Warriors4Warriors has been in existence since the summer and is registered as a nonprofit. “July 16 was the kickoff date, and everything was up and running by August,” Langworthy said.

The charity is set up as a trust, in which money raised is spent on providing a variety of services for veterans. “We don’t want to limit what we will spend the money on,” he said. “While the VA gets their paperwork straightened out, we can assist people, as long as it’s a problem that is contributing to their mental or physical condition.”

Veterans do not only have issues getting VA coverage in an overloaded system. Many veterans or active-duty servicemen don’t want to come forward and seek help for mental health problems.

“They don’t want to be stigmatized for it, so they seek outside help,” Langworthy said. “It’s not their fault, but this is leading to a suicide rate in the military that’s climbing daily, to one a day.”

This high rate of suicide is a consequence of the lack of treatment and awareness, he said.

“Many families don’t even want to report the deaths as suicide because they are afraid they won’t get benefits or they don’t want to shame the soldier,” Langworthy said.

Langworthy and Galone’s mission is to give back to the soldiers who risked their lives for this country. Through Warriors4Warriors, they are able to do this by making them less dependent on the VA for services. Their goal is to become a nationally recognized organization.

“We want to be everywhere and have an advocate in every state,” Langworthy said. “I’ve gotten e-mails from out of state already, some as far as California, asking for help.”

The more assistance the nonprofit can provide veterans, the more ways it can help reduce soldiers’ stress, which is one of the key triggers of PTSD. “Over the last six years, PTSD has been tossed into the limelight, so now there is more being known than ever,” Langworthy said. “But it’s still in its infancy stage in terms of knowing the symptoms.”

Langworthy, who served in the medical field while in the military, specialized in behavioral health and counseling and now is working to become a registered nurse. While working at a VA hospital in Houston, he led a group of PTSD victims and heard traumatic stories about its effects.

“To hear these guys’ stories on why they were there and how they got addicted to drugs, painkillers and alcohol was tough,” he said. “The reason why they got into these things was because when they did reach out for help. Many were from the Vietnam War and did not receive proper PTSD treatment. They were pretty much told to put a Band-Aid on it and suck it up.”

Other veterans were from the current war in Afghanistan. “They were addicted to painkillers and antidepressants because that’s what the VA gave them for treatment,” Langworthy said. “That alone will not solve the problem. Research has proven that proper counseling and medication will work, but not one alone.”

By reducing the stressors in the lives of these veterans, Langworthy and Galone believe their group can help relieve the effects of PTSD.

“Whether it’s paying someone’s mortgage payment for that month so that the banks won’t go after their home, helping them find a job by fixing their résumé or getting them clean clothes, we want to do it all,” Langworthy said. “These are the little hindrances that can become major problems and cause veterans to go to a dark place.”