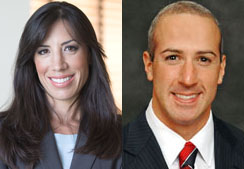 The candidates running for the newly drawn State Senate District 25 seat — State Rep. Joseph Abruzzo and equestrian businesswoman Melanie Peterson — got a chance to discuss the issues at a Wellington Chamber of Commerce candidates forum Wednesday night at the Wanderers Club.

Asked his opinion of public-sector unions influencing public policy in the state, Abruzzo said he didn’t believe they have enough influence. He pointed to a recent decision by the legislature to mandate that all public employees give back a portion of their salary to the state to go toward their pensions.

“The legislation was passed for public-sector employees to contribute a portion of their pension [cost] to the state,” he said. “I thought that was egregiously wrong. It didn’t go back into the pension system. It went into the general budget to fill revenue gaps.”

Abruzzo said that, until recently, Florida had one of the strongest public-sector pension plans. “We balanced our budget on the backs of our public employees,” he said. “I am against that.”

Peterson said she thought that unions have too much influence. “I think that we have to break the hold that the unions have on small businesses and this economy that we are trying to thrive here in Florida,” she said. “Otherwise we’re going to be constantly facing the same situation over and over again.”

Peterson said that she believes the state pension system is in need of reform. “There’s no question that teachers are underpaid in this state,” she said. “No one wants to take any more money out of the pockets of those who are educating our children. But the fact is that these pensions are draining our state. We have to have a conversation with our employees about their contributions.”

The next topic was immigration reform, and candidates were asked how they would tackle the issue and whether they supported a law similar to one recently passed in Arizona.

Peterson said she believes the nation as a whole has a problem with illegal immigration. “We need to lean on our federal government to put through comprehensive immigration reform,” she said. “We’re getting beat by countries like Canada and New Zealand. We have to do better.”

She noted, however, that some of Florida’s industry relies on immigrant workers. “We can construct a very intricate guest worker program that is specific to our economic roots,” Peterson said. “We can take the initiative in writing legislation and guest worker programs that make our state more advantageous for legal workers to come here. Rather than put a Band-Aid on the issue, I’m going to take the initiative, write legislation and make Florida the most advantageous place to come if you want to come here, pay taxes and service our industries.”

Abruzzo said he has firsthand experience in addressing the immigration problem through his time in the Coast Guard.

“This is a national issue,” he said. “But yet, in Florida, we are greatly affected. I cannot support an Arizona-type bill as long as people can be racially profiled. That’s not what Florida is about. It’s not what America is about.”

He said that a similar bill came before the legislature and did not include training for law enforcement. “They wanted to have our deputies go out and be immigration officials,” Abruzzo said. “But yet, they didn’t budget for training. That is inappropriate, and I would not support a measure like that in the state.”

The two differed in their opinions on the use of public money for school voucher programs.

“I’m against taking money out of our public education system,” Abruzzo said. “I think it’s wrong.”

He said that Florida has a poor teacher retention rate, which leads to the problems in schools that would drive students to other programs. “They aren’t just leaving to go to other schools,” he said. “They’re going into another profession. We won’t be able to stabilize our education system until we get great and qualified teachers to stay right here in Florida.”

Peterson, on the other hand, said she thought parents should have more choice in the education their children receive.

Peterson said that the state should work to cultivate great principals to lead schools. “Teachers will tell you that a school is only as good as its principal,” she said.

In closing, Abruzzo said that he hopes voters will look at his experience. “My time in the legislature has truly been about getting things done,” he said. “There’s a saying here in Wellington, ‘You’re either a show horse or a work horse.’ I went to Tallahassee to be a work horse. I think we delivered in a big way, passing 20 bills in four years. Many have been about public safety, helping our economy and helping education. I am proud to be the Democratic nominee, and I hope that I have your support this election season.”

Peterson said she is invested in the community and will work for residents.

“This election isn’t about party,” she said. “It’s about our future. Every day I speak to people… and they are concerned about the state of our state. I feel that now, more than ever, we have to have a strong state. The support I need on Election Day is yours.”