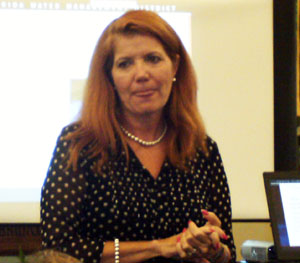 Representatives from the South Florida Water Management District brought the Loxahatchee Groves Landowners’ Association up to date last week about what was done to deal with the deluge of 12 to 18 inches of rainfall from Tropical Storm Isaac.

“We have about 1,600 miles of canals,” explained SFWMD outreach specialist Laura R.H. Corry. “The natural Everglades went way east. That’s why they built I-95 over there. Most of where we’re at right now were wetlands, marshlands, part of the natural Everglades.”

During a storm bringing 4 to 6 inches of rain over 24 hours, people can expect to see water on the roads and in swales, Corry said. Seven to 10 inches in 72 hours will fill swales and roads, but buildings should remain dry.

“If you get 10 to 20 inches in 72 hours, you expect it to be flooded,” she said. “We had 15 inches within 48 hours or less, so I think that the system actually worked really well. Was it inconvenient for a lot of people? Absolutely. Would we rather have been able to move the water more quickly? Yes. The district was prepared to handle the water that was coming in. It’s just that it was a huge amount of water.”

Corry said the SFWMD started draining the area long before Isaac came through. “We have two meteorologists that work for the district,” she said. “We have a control room manned 24 hours a day, seven days a week. From that, they are able to predict, as well as can be predicted, very specifically where water is going to come.”

SFWMD Senior Engineer James Fyfe said he was surprised at how low the canals had been drawn down before the storm hit. “That storm was not predicted to bring a lot of rain,” he said. “It was very unusual that there were feeder bands that came on. There was a train of storms that came up from Miami and worked right to Vero. It was just unrelenting.”

The forecasts can predict the amount of moisture that is going to be in a storm but not exactly where it is going to fall.

“Certain areas can have a very big difference,” he said. “This storm was a perfect example of that.”

Corry said hurricanes and tropical storms vary greatly in their makeup, such as Hurricane Andrew, which was small and compact but a Category 5 hurricane that devastated Homestead while delivering only 6 inches of rain. Tropical storms such as Isaac tend to be wetter than hurricanes but not as predictable as to where rain will fall.

During the storm, all drainage districts were able to participate in conference calls with the SFWMD to coordinate stormwater management, Corry said. “Everybody was participating along with the county, and that is standard procedure,” she said.

Fyfe added that the conference calls enable everyone to be aware of any faults in the system, such as malfunctioning gates, and coordinate information about forecasts.

Corry said the bands had been predicted to hit Miami-Dade the hardest. “Obviously, it hit us a whole lot more,” she said. “I think we moved 88.1 billion gallons of water.”

Emergency orders were issued and stormwater was discharged through the C-51 Canal east and west to Stormwater Treatment Area 1E and Lake Okeechobee, and through the L-8 Canal to the L-8 Reservoir, she said.

“If you saw how quickly that lake was rising, it was pretty incredible, seeing that it is the second-largest freshwater lake in the United States,” she said.

Corry said the SFWMD set up about a dozen temporary pumps, including at the J.W. Corbett Wildlife Management Area and in the Deer Run community, to help control flooding. “These are huge pipes,” she said. “We had staff working 24 hours a day trying to set up these temporary pumps to move the water.”

Corry added that improvements to the system are already in the works. For example, she noted that the SFWMD recently finalized a deal to purchase the Mecca Farms property, which was utilized during the storm’s aftermath as an emergency reservoir when water in the Corbett area got too high.

Mecca will be adapted eventually to provide more water to the Loxahatchee Slough, which has lost water sources due to development in its headwaters area. During the flooding, the SFWMD built a weir allowing stormwater to flow into Mecca.

For the system to work properly, careful coordination is needed and local entities must make sure their systems function properly.

“If you can’t drain into the local drainage system, they can’t drain into us,” Corry said, explaining that SFWMD received at least 1,000 calls from individuals who were panicking when they saw water levels rising near their homes. “It’s the homeowners’ association in your community that needs to be able to take care of that,” she said, making sure that drains, culverts and swales are cleared and maintained so they handle the water.

For more information about the SFWMD’s storm response, visit www.sfwmd.gov.