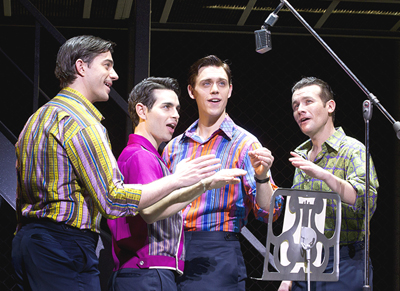 Tickets are now on sale for the West Palm Beach return engagement of the Tony, Grammy and Olivier Award–winning hit musical Jersey Boys, the story of Frankie Valli and the Four Seasons, which will run Dec. 19 through Jan. 6, 2013 at the Kravis Center for the Performing Arts.

The premiere engagement of Jersey Boys in West Palm Beach was an overwhelming success, seen by nearly 50,000 theatergoers, breaking the records for ticket sales during its three-week run and featuring “hits that roll out like the Fourth of July” (Palm Beach Daily News).

Jersey Boys is part of the Kravis on Broadway series presented in West Palm Beach. To catch a sneak peek, visit www.jerseyboystour.com/watch.

Jersey Boys is the story of Frankie Valli and the Four Seasons: Frankie Valli, Bob Gaudio, Tommy DeVito and Nick Massi. It is the tale of how a group of blue-collar boys from the wrong side of the tracks became one of the biggest American pop music sensations of all time. They wrote their own songs, invented their own sound and sold 175 million records worldwide, all before they were 30.

In addition to the show, there will be a “Beyond the Stage” pre-performance discussion by Jason Gillman and Jacqueline Bayne at 6:45 p.m. and a free musical presentation in the Dreyfoos Hall lobby Dec. 20 at 7:15 p.m.

Performance schedule, prices and cast are subject to change without notice.

ABOVE: The Four Seasons in the studio in a scene from Jersey Boys.