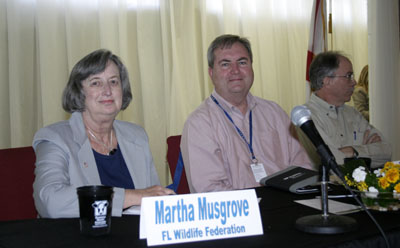 Everglades restoration and its effect on farmers was the topic of a panel discussion at the annual Farm City Luncheon held Wednesday, Nov. 14 at the South Florida Fairgrounds.

Total sales for last season were estimated at $1.75 billion with an economic impact of more than $2.7 billion. “That’s a tremendous industry here in Palm Beach County,” Miranda said.

Bernardino said many people travel to Florida from all over the world just to see the Everglades.

Musgrove said the Everglades is the distinguishing feature of South Florida.

“When you come to South Florida, you have to get used to the rainy season and the dry season, and that’s a very critical distinction,” she said. “Many of our snowbird friends leave during the rainy season, so they don’t really have an appreciation.”

This requires both protecting the Everglades while also keeping South Florida’s flood protection system in place. “That keeps us from floating away into the ocean,” Musgrove said.

Barnett said the key to Everglades policy is sustainability.

“We have a very vibrant economy in South Florida, and that economy is very much dependent on water,” he said. “Whether it’s water for the natural system, water for agricultural production or water for the urban environment, water is our lifeblood. There’s about 5.8 million people who rely on water that comes directly out of the Everglades every day. It is the main source of water that recharges our aquifer.”

Barnett agreed that the intrinsic value of the Everglades is important. “It is an economic engine in and of itself, and people will need to understand how the ability to have the tourism and ecotourism [makes] people come and experience the joy that I feel when I go out in the Everglades.”

MacVicar, a professional engineer and fourth-generation Floridian, spent 16 years with the SFWMD before starting his own consulting firm. “I only do one thing, and that’s water,” he said. “If all you do in South Florida is water, you do the Everglades. It kind of defines the story.”

He said the picture reflects a plan that people such as his grandfather and great-grandfather came up with that reflects a balanced picture. “There were plans that they looked at that were much more destructive to the Everglades than the one that was built,” MacVicar said.

Bernardino said that farmers in the Everglades Agricultural Area have dramatically reduced phosphorus farm runoff over the past 16 years, which has reduced the amount of phosphorus being released into stormwater treatment areas to 25 parts per billion, which he said is cleaner than rainwater.

“While most people would claim that this has been a tremendous success, we still see that the federal government and the environmental community are pushing for more,” he said. “What is the real issue? Is it to restore the remaining Everglades ecosystem to mimic the timing, flow and distribution of water as it was in the original ecosystem or to restore the Everglades to its original footprint from Lake Okeechobee to Florida Bay?”

MacVicar said there is no real consensus on what the vision is. “If you look at the environmental components in South Florida, the Loxahatchee Refuge doesn’t want the same design and restoration that Everglades National Park wants,” he said. “Biscayne Bay on the east side of Miami-Dade County doesn’t want what Everglades National Park wants on the west side of the county. Their goals are in conflict with each other.”

Barnett said his agency has tried to address some of those conflicts, but there are difficult challenges to overcome. “The fact of the matter is the flood control projects were built,” he said. “It was authorized in 1947, and allowed for the development that took place in South Florida.”

Musgrove said the drainage system that Florida depends on today divided various segments of the Everglades. “At one time, the original Everglades was water as far as you could see from Orlando all the way to Florida Bay,” she said. “When you compartmentalized the Everglades, you created vast reservoirs that are known as conservation areas to the north, and you channelized the Kissimmee River, and you diked Lake Okeechobee, you forever altered parts of the system.”

Musgrove said there are 68 different projects in the Comprehensive Everglades Restoration Plan.

“Everybody involved wanted some segment of restoration for their systems,” she said, pointing out that some areas, such as Everglades National Park, wants as low as 10 parts per billion of phosphorus, while other areas can tolerate 25 or as high as 50 ppb.