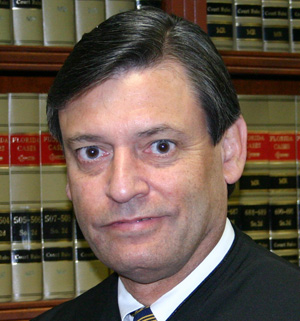 Justice Jorge Labarga is grateful this Thanksgiving for more than the usual reasons. Yes, he has a nice home in Wellington, a great job, a beautiful wife and a daughter who just graduated from college with another close behind.

He’s also thankful for more than the fact that this is his 50th Thanksgiving in America. Or even that he’s a melanoma survivor.

A justice of the Florida Supreme Court for almost three years now, Labarga, appointed by former Republican Gov. Charlie Crist, is especially gratified that voters heard the voices of reason and on Nov. 6 sent a clear message to state politicians trying to tinker with the institution of an independent judiciary.

“I am absolutely grateful to the voters,” Labarga said. “The people of the State of Florida have spoken loudly that they do not want politics involved in the judicial system.”

A two-pronged threat had loomed. One was a concerted recall effort to dump three justices on Florida’s high court appointed by Democratic governors. The effort was backed by the Republican Party of Florida and a super-PAC known as Americans for Prosperity, which also spent a lot of money on television ads against President Barack Obama.

Justice R. Fred Lewis was quoted in an Oct. 2 New York Times story as calling it a “full frontal attack on a fair and impartial judicial system.” The effort targeted him and justices Barbara J. Pariente and Peggy A. Quince. All three justices were up for retention votes Nov. 6. No justice in Florida history has ever lost a retention election.

“All the justices were retained despite the massive campaign against them, by 68, 69 percent of the vote,” Labarga noted. “Amendment 5, which would have turned the rule-making authority usually invested in the Florida Supreme Court and the judicial system over to the legislature, was defeated soundly. It did not even get 50 percent of the vote.”

The amendment needed over 60 percent to pass. “I see that as a loud message from the people of the State of Florida that they do not want politicians meddling with an independent judicial process,” he said.
Amendment 5 was the second prong of the attack, put on the ballot by the Republican-controlled legislature.

Labarga noted that two retired justices of the United States Supreme Court had been in Florida recently to speak out against the attacks on the court’s independence. “Sandra Day O’Connor has been very vocal about this,” he said. “So has retired U.S. Supreme Court Justice John Paul Stevens, who just spoke here in Palm Beach County a few weeks ago, where he basically said the same thing.”

Labarga, who was born in Cuba and came to the United States when his mother, his brothers and he escaped through Mexico City in 1963, right after the Cuban Missile Crisis, knows firsthand the value of a constitutional separation of powers after Fidel Castro initially supported Cuba’s 1948 Constitution during the revolution and then renounced it.

Labarga said he was especially heartened that voters were conscientious this year, even faced with a long ballot including 11 proposed constitutional amendments.

“It’s not like they went down the row of those constitutional amendments and just voted no,” Labarga said. “As you can see, some of them passed, and some of them failed, but people actually studied them… So hopefully this will send a message once and for all to concentrate on the economy and what ails our country and our state, and leave our judicial system alone.”